KGO
By Renee Koury
OAKLAND, Calif. (KGO) -- A peer-to-peer payment platform called Zelle is gaining popularity, but also complaints. Some users say it's too easy to send money to the wrong person and it's impossible to get it back.

But did you ever wonder about who's on the other end getting these riches by mistake?

It happened to Oakland resident Rik Sheldon, who received a Zelle payment meant for someone else.

All he wanted to do was give it back. Instead, his bank shut down all his accounts, leaving him without any money. And in the end, that payment disappeared.

"It was an unbelievable mess,'' Sheldon said. "I couldn't believe such a small transaction could turn into a huge problem."

Zelle is touted for its simplicity and ease. All users need to do is type a mobile number or email address into the app and the money is whisked off to the recipient. However, if they type in even one wrong digit, the money will go to the wrong place. And there's no easy way to get it back.

"The banks rolled it out,'' Sheldon said. "But they don't seem to know how it works."

Sheldon said he signed up grudgingly for Zelle since it's now the only option for electronic money transfers at his bank, Wells Fargo .

His troubles began with a puzzling email from the bank one day.

At first he thought it was a mistake. Then, another email, this from a man in Illinois.

"It said the $100 was a birthday present for his daughter and he sent it to me by mistake, that he typed the wrong email in Zelle." Sheldon recalled. The man supplied the daughter's email address and asked Sheldon to please send $100 to her.

Sheldon thought it was a scam.

"I thought it was one of those scams where they send you money, then ask you to send it somewhere else, then the money disappears and you've actually sent that person your own money.''

Next, he got a third email, this from someone saying she was the daughter, Rose Sheldon, and could he please send her the $100 birthday present. Now Sheldon was even more suspicious.

"I didn't know if it could be money laundering, could've been some other fraud."

RELATED: 7 On Your Side helps Fairfield mom who had money swiped by ATM

Sheldon tried to simply refuse to accept the money, but the Zelle platform didn't have an option to decline the transfer. So he contacted Wells Fargo.

"They didn't know what to do. They never heard of this issue,'' he said.

Instead, he said, the bank told him to simply send a check for $100 to this person. That didn't seem safe. Sheldon said he didn't want to inject himself into a situation that might be fraudulent.

"If it was money laundering or some kind of terrorist activity I didn't want to be linked to it,'' he said. "I had no idea who this person was or if it was legit. So I told them it was not an acceptable solution and they needed to reverse this transaction. It's their system how could they not know how to reverse it?"

Days later, the bank said it did find a way.

"It would take five to seven business days. I said, 'Great, that's all I wanted.'"

But instead, a few days later, Sheldon got a big scare.

"I was told all my accounts were locked,'' he said. "There were multiple unsuccessful login attempts. Immediately my alarm bells were ringing that somebody hacked my accounts, somebody was draining them, because I couldn't access my accounts."

After hours on the phone Sheldon found the real culprit: It was that $100 Zelle payment. Wells Fargo, in trying to reverse that transaction, had treated it as a case of fraud. That froze all of Sheldon's bank accounts. He couldn't get access to his own funds.

It took hours on the phone, a special case manager and days of waiting until he could unlock his bank accounts. That $100? It was removed from his bank account. But after that, it disappeared.

Which brings us to the person who sent that money in the first place: It was not a fraudster at all. It was Larry Ethun, a retiree living in Rockford, Illi. All he wanted to do was send his daughter $100 for her birthday.

"My three kids say 'Dad, you gotta get into the modern era, you don't send checks anymore, you gotta send it electronically,''' Sheldon told ABC7.

Ethun spoke to us via Facetime. He said his kids goaded him into trying Zelle for the first time. But his daughter, Rose Sheldon, and Rik Sheldon have very similar emails.

"And I missed a couple of digits on the thing,'' Ethun said. "I didn't know it, and I typed in the email and hit go and the software came back and said, 'OK, it's transmitted.'"

Instead of going to Rose, the $100 went to Rik Sheldon.

ABC7 introduced Sheldon and Ethun via Facetime. The two men, oddly connected by the crossed wires of electronic banking, lamented at how difficult it was to correct such a simple mistake.

"I'm so sorry I put you through all that,'' Ethun told Sheldon over Facetime. "I can't believe they had to freeze your accounts and everything."

Sheldon apologized for suspecting he was a fraud.

"I just can't believe that after all our efforts we still haven't gotten that $100 back to you,'' Sheldon told Ethun.

ABC's 7 On Your Side team contacted Wells Fargo Bank, asking whatever happened to that $100? The bank could not say where that money went, citing privacy rules. A spokesperson did say there is a process in place for reversing mistaken Zelle transactions when both parties agree the payment was sent in error.

"The reimbursement process is typically completed in a timely manner when both parties involved in the misdirected payment contact their respective financial institutions," the spokesperson said. "However, in this situation, the payment reimbursement was delayed. We are making improvements to our process to help ensure this does not happen again."

And after our inquiries, that $100 suddenly landed back into Ethun's account.

"I can't thank you enough,'' Ethun told 7 On Your Side. "Without your intervention, I don't think I ever would have gotten that money back."

"I think he'll buy me a beer, right?" Sheldon asked.

As for Ethun, from now on, his kids are getting checks for their birthdays.

"I said to myself, 'Larry, you've learned your lesson.'" 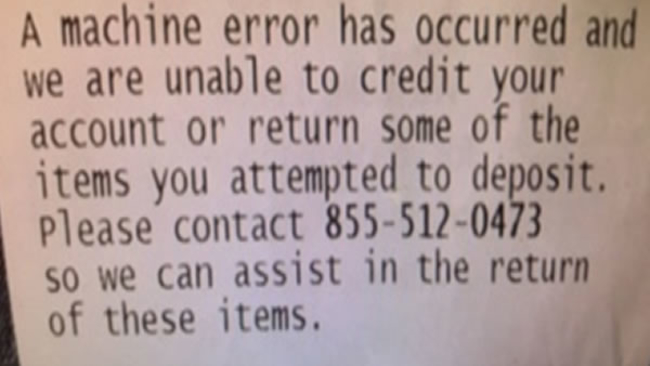 7 On Your Side helps Fairfield mom who had money swiped by ATM
7 ON YOUR SIDE
Woman watches via text as scammer drains EDD benefits
Man reports fraud, EDD cuts off his benefits
Widow can't get tax refund until she proves husband's death
What does EDD's 2-week shutdown mean for you?
More Videos
From CNN Newsource affiliates
TOP STORIES
LIVE: CAL FIRE holds press conference on North Bay fires
SF opening indoor dining today with restrictions