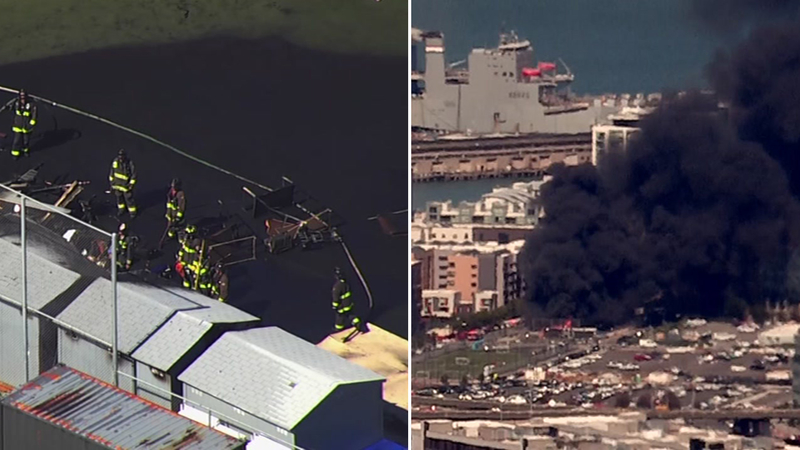 SAN FRANCISCO (KGO) -- A plume of thick black smoke was visible across several parts of San Francisco on Tuesday afternoon. The fire broke out at Mission Bay Boulevard and Fourth Street at SPARK Social SF about 3:50 p.m.

Fire officials tell us the blaze started in a shed next to an area where food trucks park and serve customers. Because of the AstorTurf, the fire spread quickly to the dining area.

Firefighters say one or two sheds caught fire and they had to destroy another.

A shed fire at a food truck park in San Francisco's Mission Bay sent a massive plume of dark smoke into the air.

Fire officials did say this was not an explosion, just a fast-moving fire because of the wind and the rubber AstroTurf which made the fire burn quickly.

There were about 50 people at the location when the fire broke out, officials say.

The owner of SPARK Social SF, Carlos Muela, said the sheds contained dry storage with things like glassware and wine. He is not sure what caused the fire but said they will be looking into it.

"Thank God nobody got hurt and luckily it wasn't during the rush hour around 4PM so there wasn't many people on site," said Muela.

PG&E was on scene but Muela confirmed there were no gas lines that where inside the sheds that burned.

So far, there are no reports of any injuries and officials haven't revealed what started the fire.

Here's a look at that thick plume of smoke from the fire at @SPARKsocialSF. Latest info: https://t.co/UMAdSFXxya (Video: @dolphinLE14) pic.twitter.com/xVuaNykaFr

From the dog park at Long Bridge 20 minutes ago pic.twitter.com/3pOIYiAWLU