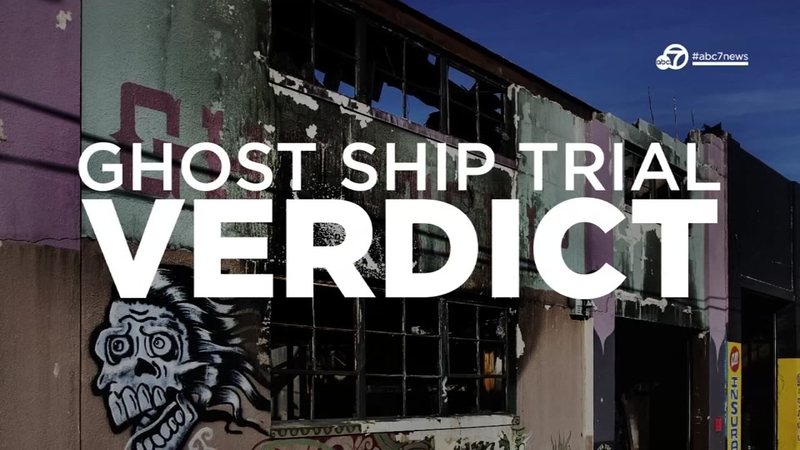 OAKLAND, Calif. (KGO) -- A jury has acquitted one man of involuntary manslaughter but couldn't reach a verdict for the leader of an artists' commune accused of turning the Oakland Ghost Ship warehouse into a cluttered maze that trapped 36 partygoers during a fast-moving fire.

While 29-year-old defendant Max Harris was acquitted on all 36 counts of involuntary manslaughter, the judge declared a mistrial for 49-year-old Derick Almena. The jury foreman says they voted 10-2 in favor of conviction for Almena, but couldn't break the deadlock with multiple votes.

RELATED: What's next for the Ghost Ship case? Here are the retrial scenarios and huge pending civil suit

Harris, who could have faced 39 years in prison, hugged his attorney after the first not-guilty verdict was read. He was then returned to Santa Rita Jail in Dublin to be released. The process took several hours.

The Alameda County Sheriff's Office says he was released privately from the Santa Rita Jail around 6 p.m. A spokesperson confirms deputies drove Harris away from the jail.

Harris was said to have left "happy, but emotionally drained."

At this point, he's spent years in jail after that summer 2017 arrest.

Max Harris has been released from custody. 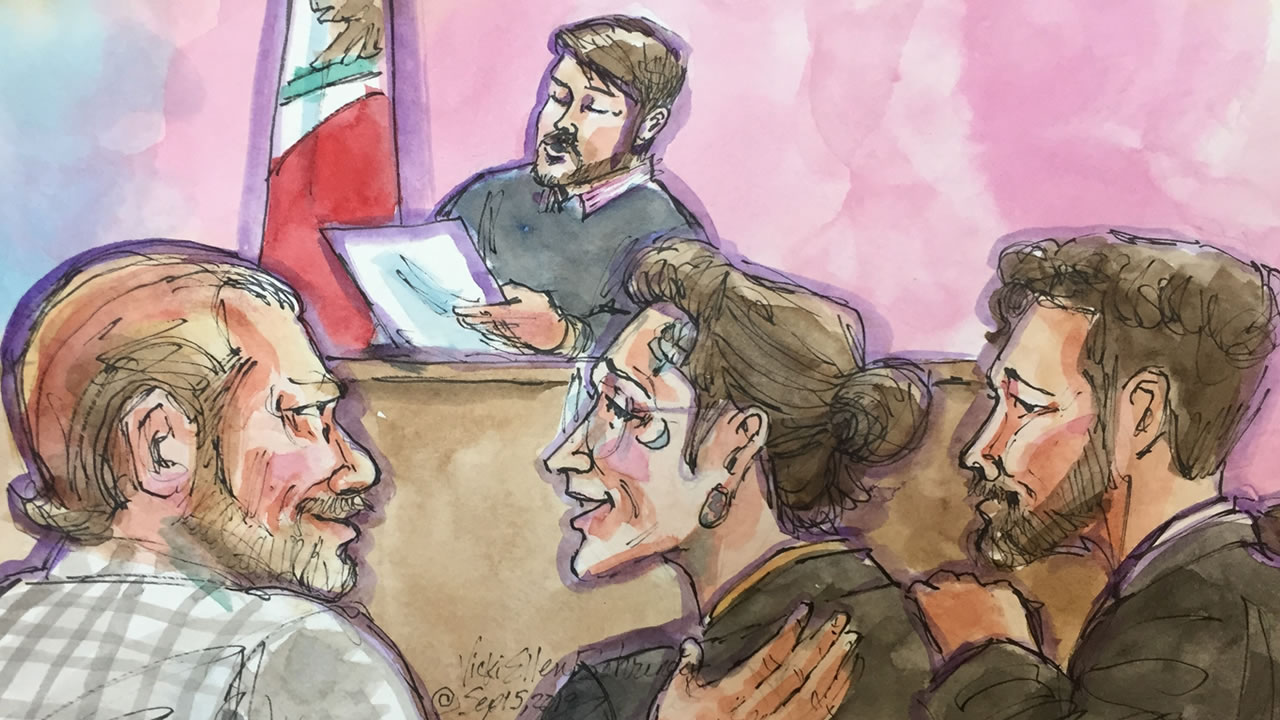 In this courtroom sketch, Max Harris is seen with his attorneys after a verdict was reached in the Ghost Ship trial in Oakland, Calif. on Thursday, Sept. 5, 2019.

His defense attorney Curtis Briggs says Harris' release will, "Start with a nice vegan meal that's not served by Santa Rita Jail and then we'll take it from there."

Three dozen people died in the fire that broke out during an electronic music show at the artist collective.

Briggs took a moment to remember the victims before he spoke outside the courtroom after the verdict was read. He also called out Oakland city officials.

"Not one city official had the courage to get up on the witness stand and tell the truth," said Briggs. "The community cannot be safe until we get accountable leadership in the city and in the county."

Two men were charged for the deaths of 36 people in the Ghost Ship fire, but the investigation put a spotlight on incidents before then that could have prevented the tragedy.

Harris' attorney Tyler Smith said Harris is "incredibly sad" for the families of the Ghost Ship victims. He said he wished that he could have done something.

A statement was released on Thursday afternoon on behalf of the victims' families: "We'd like to thank the District Attorney's Office for their diligent work in holding these defendants accountable for their crimes. However, there is additional work to do to complete the circle of justice, and that includes the civil case against PG&E, the City of Oakland, the Ngs (property owners) and others. We look forward to going to trial in May to obtain the full measure of justice the victims and their families deserve. Thank you."

Oakland Mayor Libby Schaaf also released a statement, ""Our thoughts are with the families and friends of the victims today. I am grateful for the professionalism and integrity displayed by all current and former city employees who participated in this trial. We send warmth and comfort to everyone in our community who was impacted by this devastating tragedy."

Almena will be back in court on Oct. 4 for a hearing to set a new trial date, according to his lawyer, Brian Getz.

Last month, Judge Trina Thompson booted three jurors for misconduct and ordered the new jury to restart deliberations and disregard all past discussions. The new jury had been deliberating since Aug. 26.

Attorney Tony Serra tells ABC7 News that the jurors were let go because one juror consulted a fireman for advice who was not a witness in the case, then shared the information with two other jurors.

Prosecutors argued the two defendants were criminally responsible for the fire because the victims couldn't escape the blaze since the warehouse didn't have important fire safeguards required in a residential building that was originally leased as a storage facility.

Prosecutors also argued that Almena and Harris violated the terms of the building's lease, which only called for it to be used as a warehouse for an artists' collective, by turning it into a living space and hosting underground music parties there.

Tony Serra, a defense attorney for Almena, argued the fire department lied and perjured themselves to protect the city from lawsuits and claimed they made Almena a scapegoat.

Briggs also argued the cause of the fire remains undetermined and alluded to possible arson by citing witnesses who described glass breaking, unidentified intruders at the 10,000-square-foot warehouse and a firecracker smell.

Almena and Harris were set to be sentenced to nine and six years in prison, respectively, after pleading no contest to manslaughter last year. But a judge threw out their pleas after many of the victims' families objected, saying their proposed sentences were too lenient.

VIDEO: Witness describes what it was like inside Ghost Ship warehouse

Almena and Harris have also been named in lawsuits from victims' families saying that Oakland's fire and building departments failed to inspect the warehouse annually as required. The lawsuits say inspectors would have discovered the illegal conversions.

The owners of the building were also named in lawsuits. They have not been charged and have not spoken about the fire.

Here are the latest stories and videos about the Ghost Ship Fire trial.

TIMELINE: How the Ghost Ship fire investigation unfolded
Ghost Ship Fire: Witness describes what it was like inside warehouse 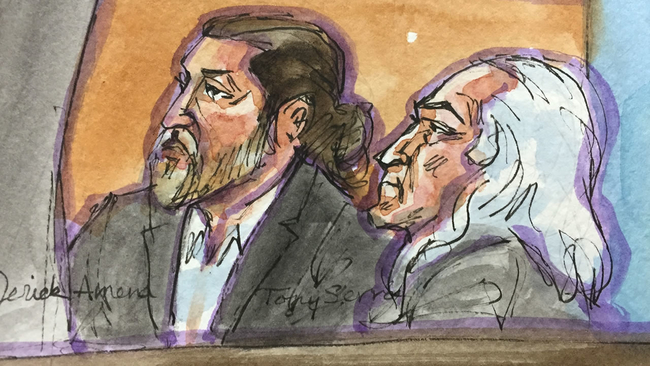 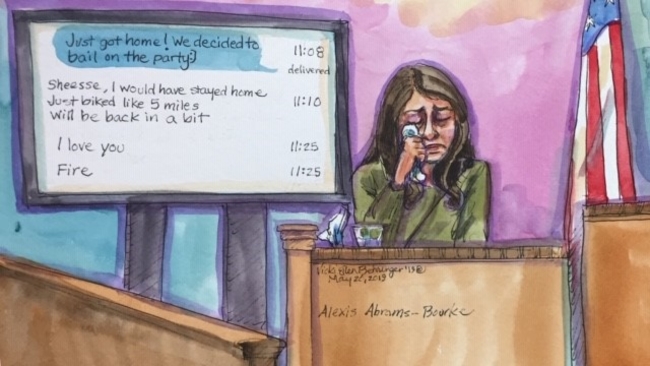