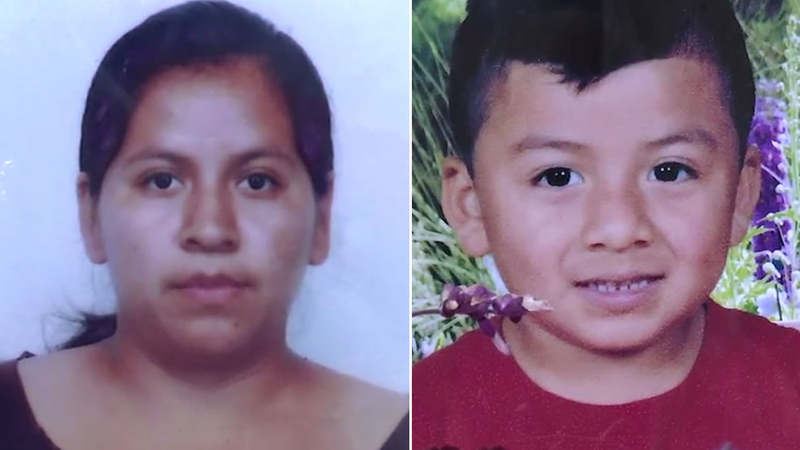 OAKLAND, Calif. (KGO) -- The victims involved in a hit-and-run on Saturday night have been identified as Alma Soraya Vázquez and her 6-year-old son, Ángel García Vázquez.

#ABC7Now | Victims identified as 30-year-old Alma Soraya Vázquez and her 7-year-old son Ángel García Vázquez. The mother and son were crossing 26th Ave & Foothill Boulevard in Oakland Saturday night when a car struck them and fled the scene. @abc7newsbayarea pic.twitter.com/ywnZSb9tyW

The mother was crossing 26th Avenue and Foothill Boulevard in Oakland with her son and husband's brother when a two-door Mercedes-Benz struck them and fled the scene.

Around 7:25 p.m., paramedics tried to revive 6-year-old Angel Garcia Vazquez. His mom 20 feet away from him, fighting for her life -- across from her was 19-year-old Jaime Garcia.

#ABC7Now | Anselmo Garcia ran out of his house and found his wife, son, and 19-year-old brother laying on the street fighting for their lives after being stuck by a car.

“I’m really broken, my heart. I have two kids left. I lost half of my family. I need help” @abc7newsbayarea pic.twitter.com/PYRnIf59no

Garcia remembers talking to his wife asking her to hold on.

"Be strong for the rest of my kids. I saw her, she was crying. That's all I saw from her," said Garcia. His 19-year-old brother, Jaime Garcia, was the only one who survived, but remains in critical condition.

#ABC7Now | Anselmo Garcia describes the heartbreaking moment when he ran out of his house and found his wife and son fighting for their lives.

Throughout the day, neighbors collected funds to help the family with funeral expenses and held a vigil in their honor.

#ABC7Now | Friends and neighbors of the victims left flowers and candles at the corner where the three victims were struck by a black Mercedes Benz.

The third victim was identified as 19-year-old Jaime Garcia who remains in critical condition. @abc7newsbayarea pic.twitter.com/vWua3ScPHG

According to Oakland police, the suspect who drove off from the scene is a black male, about 6'2, wearing a white t-shirt and a grey hoodie. The suspect was caught on a nearby surveillance video leaving the black Mercedes-Benz with a broken windshield and blood.

"This is a very busy street. Something was going to happen sooner or later," said neighbor Jerry Pong.

Pong, along with other neighbors, want the city of Oakland to install several signs and traffic lights to prevent more accidents.

"It's a long distance from 28th to 23rd with no lights or stops or anything. Something needs to happen," said Johanna Masis.

Vazquez leaves behind an 11-year-old son and a 1-year-old daughter.

Oakland police said they have a possible suspect but have not made an arrest.

Oakland city councilman Noel Gallo is scheduled to visit the neighborhood and speak to the family.