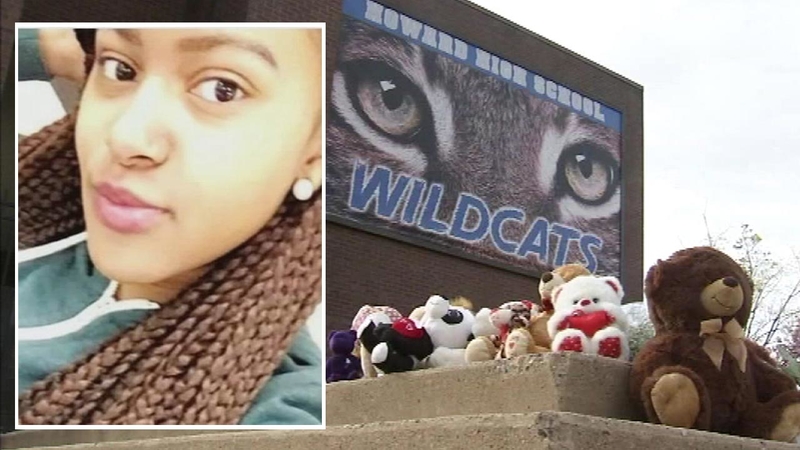 WILMINGTON, Del. -- Students at a Delaware school are still coming to terms with the tragic death of a classmate, who died following an assault in a bathroom.

Officials say 16-year-old Amy Joyner-Francis died after being assaulted by two other students on Thursday morning at the Howard High School of Technology in Wilmington. Her exact cause of death remains under investigation and, so far, no charges have been filed.

Classes resumed Friday, with grief counselors and other district officials meeting with students as they arrived at Howard. Classes dismissed early for the day in the wake of this incident.

A memorial grew outside of the school, as students and staff offered hugs to one another, trying to find comfort.


"This is not a young lady who was involved in street activity. This is an honor roll student, manager of the wrestling team, whose mother and father were very engaged in her life, as well as her siblings," said Councilwoman Sherry Dorsey Walker, who is serving as a spokesperson for Joyner-Francis' family.

"She was really special to me, and she had a bright future ahead of her, and it's sad it had to be taken away at such a young age," said one of her friends, Fahmee Flowers.

"She was only 16, she really didn't deserve this. She didn't even graduate high school. It's sad," said friend Donte Pickett.

At a vigil Thursday night, classmates, friends and parents prayed, held hands, and wept as they remembered Joyner-Francis, a sophomore.

"Whenever we had a problem, she would come to us and talk to us, and I never would of thought she would be the girl that would get killed like that," said 10th grade student Atiyya Wilkes.

"She was real nice," said Shane Gallagher, a member of the wrestling team. "She treated us like family and we treated her like family, and it hurts our hearts we can't ever see her anymore."

Several leaders decried the scourge of violence plaguing some communities.


"That little girl got beat up inside of a bathroom," said activist Malcom Coley. "How many of y'all stopped it? Did anybody stop it?"

Others noted a sad irony: the school has an anti-bullying campaign that kicks off every spring.

"The anti-bullying thing that schools put on, they don't really listen to 'em," said 9th grade student Julia Scott. "It honestly has to take something tragic like this to happen for them to actually open up their eyes."

"We need to get prayer back in our schools, we need to cover our babies by any means necessary, we're losing too many," said the Rev. Margaret Guy.

Earlier in the day, Mayor Dennis Williams had to take a moment to compose himself while speaking at a news conference, held a short time after learning the student had passed away.