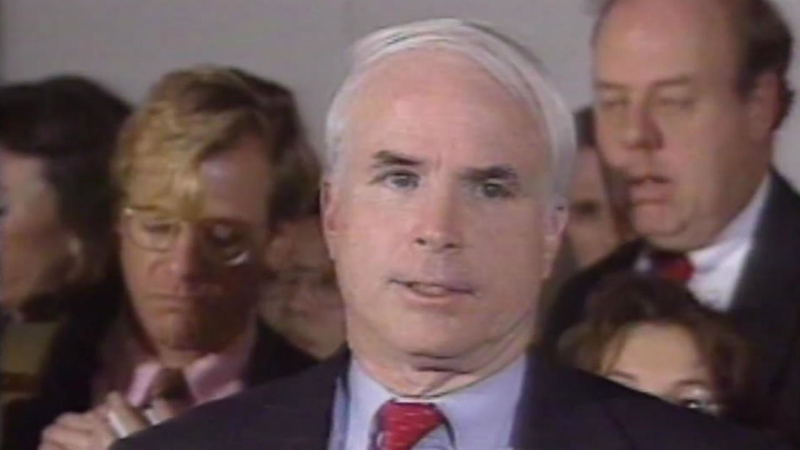 BURLINGAME, Calif. (KGO) -- Thirty years ago, John McCain became snarled in the nation's savings and loan crisis. It threatened to derail his political career while it disgraced several other Senators, dubbed the "Keating 5." However, a Peninsula attorney says McCain showed his true character by stepping up and testifying on behalf of victims whose life savings had been wiped out.

McCain was one of the so-called "Keating 5," five U.S. senators accused of ethics violations. The others were Democrats Alan Cranston of California, Dennis DeConcini of Arizona, John Glenn of Ohio, and Donald Riegle of Michigan. Each had received campaign contributions and other gifts from Keating.

Burlingame attorney Joe Cotchett sued Keating and others on behalf of 26,000 people whose savings were converted into high-risk bonds. They lost $300 million when Lincoln Savings and its parent filed for bankruptcy.

"John McCain was the only person that came to us voluntarily and said if you'd like me to testify, I will testify," said Cotchett. "He was the most decent man I've ever met."

McCain had received $112,00 from Keating. Keating was later convicted of fraud, serving four years in prison. Keating died in 2014. The Senate ethics committee found that McCain had done nothing wrong but had exercised poor judgment by attending a regulators' meeting on behalf of Keating.

Cotchett says McCain had the strength of character to testify on behalf of Keating's victims.

"He had tears in his eyes when he testified that he had helped Charlie Keating, and he didn't realize at the time unfortunately what was going on," he said.

Cotchett says the jurors were moved by McCain's sincerity. He recalled that several of them were moved to tears as well.