ABCNews
By by Kenneth Moton 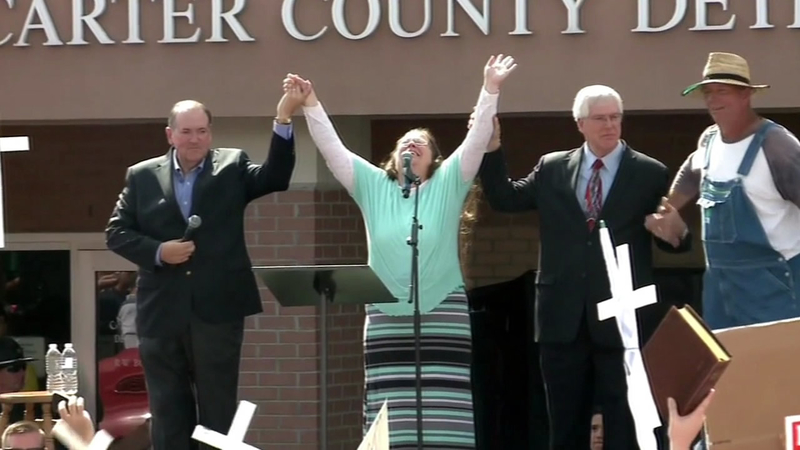 Kentucky clerk who wouldn't issue marriage licenses is out of jail

GRAYSON, Ky. -- The Kentucky clerk jailed for not issuing marriage licenses to same-sex couples has been set free. Kim Davis was released late Tuesday afternoon with her family and a GOP presidential candidate by her side.

Davis was greeted with a hero's welcome when she walked out of the jailhouse in Grayson, with thousands of people waving white crosses and cheering her on as "Eye of the Tiger" blared over loudspeakers.

Davis is heading back to work this week, but she says she will not violate her conscience which means her battle with the courts is not over. "I just want to give God the glory. His people have rallied and you are a strong people," Davis said.

A judge released Davis right before GOP presidential candidate Mike Huckabee and the conservative Liberty Counsel were set to ramp up the fight and hold a rally for Davis.

The Rowan County clerk spent six days in jail on contempt charges for her refusal to issue marriage licenses to same-sex couples because of her religious beliefs. "The courage of her convictions was more important than simply her own freedom," Huckabee said.

Davis' showdown with gay couples trying to wed sparked another national debate. Rallies were held in the streets supporting her and protests took place at the home of the judge who held her in contempt.

Davis's attorneys demanded Kentucky Governor Steve Beshear act to free the fellow Democrat, but the governor said it was up to the courts.

A judge decided Tuesday to release Davis since deputy clerks are now issuing marriage licenses. The court is now satisfied the Rowan County Clerk's office is fulfilling its legal obligation.

Davis says her fight continues because she does not want her name on those marriage licenses.