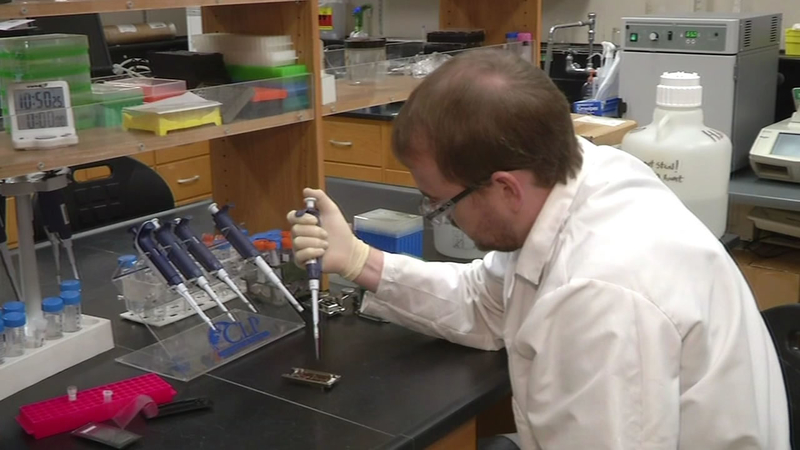 LIVERMORE, Calif. (KGO) -- Technology invented in the Bay Area could help keep American astronauts safe from hidden threats on far away missions like a journey perhaps to Mars.

Now, teams from Lawrence Livermore Lab and NASA Ames Research Center are getting ready to test it out miles above Earth in the International Space Station.

The view from the International Space Station may be out of this world, but some Bay Area scientists are more concerned about what might be lurking on the inside. "We don't know what microbes might be there," Lawrence Livermore Labs scientist Crystal Jaing, Ph.D., said.

Jaing and her team at the Lawrence Livermore Lab helped develop a powerful microbial detection array. It's a device that can quickly identify more than 12,000 types of bacteria, viruses, and other microbes. "We can determine what microbes are present," Jaing said.

And she says tracking them could critical in space. That's because months at low gravity can cause changes, even in living organisms. Raising the potential that a hitchhiking microbe could evolve into something more dangerous. "And if any of them become more virulent, or more pathogenic due to micro-gravity, or due to the extreme environment in the space station, they can become more pathogenic, and if that's the case the crews health may be effected," Jaing said.

To track what tiny visitors might be doing, David J. Smith, Ph.D., and a team from the Nasa Ames Research Center are planning to gather samples, across a space station that's roughly the size of a football field. "Where they sleep, where they exercise, where they eat, where they go to the restroom. These are the areas where we're actually curious to see how the micro-organisms in those areas change over time," Smith said.

They've trained astronauts to take samples with sterile wipes, and developed a sophisticated air sampling system. After six months, samples will be sent back to Earth for analysis. "We want to have certain counter measures available in case bad bugs effect the crew," Smith said.

He says that kind of planning will become even more urgent as NASA chases ambitious projects, such as a mission to Mars. "Space is a very difficult and hostile environment, we know that from decades of exploration," Smith said.

But it's a hostile environment that could eventually be made much safer, with technology developed in the Bay Area.

The Livermore array can process samples in a single day.

The long-term goal is to develop a system that could be placed on the space station, or taken along on a mission to Mars.