Cuomo: Limo in deadly crash in Upstate New York shouldn't have been on the road 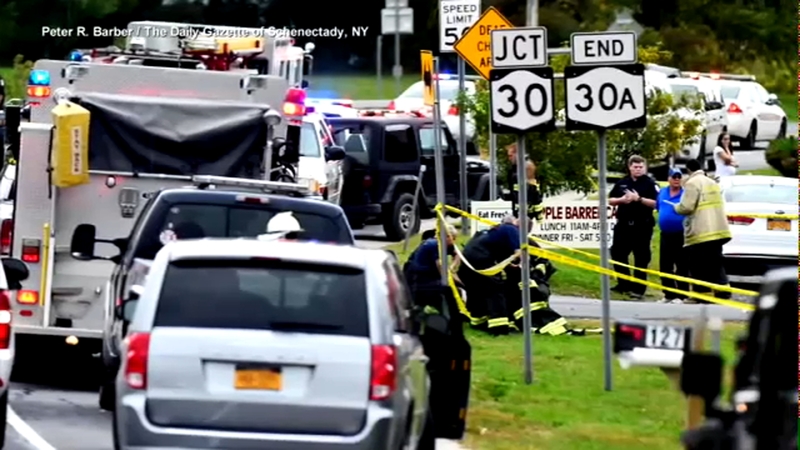 Owner of limo that crashed in Upstate New York was an FBI informant, ABC News reports

SCHOHARIE, New York -- The supersized limousine that crashed and killed 20 people outside a country store failed a safety inspection last month and shouldn't have been on the road, and the driver wasn't properly licensed, New York's governor said Monday.

The state moved to shut down the owner, Prestige Limousine, as state and federal authorities investigated the cause of Saturday's wreck in Schoharie.

The crash about 170 miles north of New York City came three years after another deadly stretch-limo wreck in New York state spurred calls for Gov. Andrew Cuomo to examine such vehicles' safety. It was not clear whether the state took any steps to do so.

Among the passengers killed in Saturday's crash were newlyweds, young parents, four sisters and their friends -- all who were heading to a birthday party.

The collision turned a relaxed Saturday afternoon into chaos at an upstate New York spot popular with tourists taking in the fall foliage, with witnesses reporting bodies on the ground and broken tree limbs everywhere. An aunt of one of the victims in the vehicle said the group had been on the way to a birthday celebration.

The 2001 Ford Excursion limousine was traveling southwest on Route 30 in Schoharie, about 170 miles (270 kilometers) north of New York City around 2 p.m. when it failed to stop at a T-junction with state Route 30A, State Police First Deputy Superintendent Christopher Fiore said at a news conference in Latham, New York.

It went across the road and hit an unoccupied vehicle parked at the Apple Barrel Country Store, killing the driver and 17 passengers, as well as two people outside of the vehicle.

Governor Andrew Cuomo said Monday that the driver was not properly licensed. He added that the vehicle failed a NYS DMV inspection last month and should not have been on the road.

The cause of the accident is still under investigation. It is not yet known if it was caused by a vehicle malfunction, operator error or some other factor.
WATCH: Gov. Cuomo discusses deadly limo crash
EMBED More News Videos

Investigators were conducting autopsies, including on the driver, to see if drugs or alcohol were factors, and the National Transportation Safety Board was also looking into whether the limo had any mechanical problems.

But officials already saw some red flags, Cuomo said: The driver didn't have the necessary commercial license, the limo had been cut apart and lengthened in a way Cuomo said violated federal law, and the vehicle failed a state inspection that examined such things as the chassis, suspension and brakes.

Police seized three additional vehicles from the limo company as part of the ongoing criminal investigation.

ABC News also reported Monday that the registered owner of the limousine that crashed over the weekend used to be an FBI informant.

Authorities said they won't release names of victims or other specifics until all families have been notified, but state police set up a hotline for family members.

The sister of one victim released a photo and some information. She said her sister Amanda Halse and her boyfriend, Patrick Cushing, were killed in the limo.

At the news conference Monday, Fiore didn't comment on speed, or whether the occupants of the vehicle had been wearing seat belts.

The National Transportation Safety Board is investigating, said its chairman, Robert Sumwalt.

"This is one of the biggest losses of life that we've seen in a long, long time," he said, the deadliest since February 2009 when Colgan Air Flight 3407 crashed in Buffalo, New York, killing 50 people.

A vigil is set to be held for the victims on Monday evening.