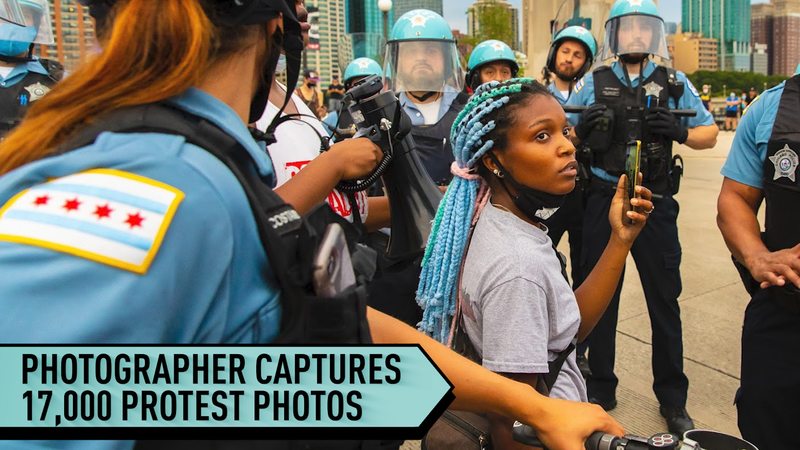 CHICAGO -- Over the summer, photographer Vashon Jordan, Jr. attended marches, demonstrations and protests to take thousands of photos and show what the Black Lives Matter movement looks like through his lens.

"The year of 2020 was one like no other. I photographed looting but I also photographed positive events," Jordan said. "I photographed Trump rallies, police rallies, everything that was going on I made sure I gave them equal coverage and I showed everyone. There are moments out here where I captured things that no news cameras captured. Black history and the Black experience is magical, and I wanted to make sure that that was held longer than a news cycle."

"With the book, people are able to see these images in a tangible form. Having items in the tangible form allows you to realize that this is real. I noticed that for people it's hard to believe a Black story if you can't physically see it on paper. I wanted to make sure that I'm coming out here and I'm showing it to you," he explained.

The Chicago March of Justice took place on June 6, in which 38,000 people took to the streets to protest police brutality. In the midst of the peaceful demonstration, Vashon snapped a powerful photo of activist Dom Brown.

"To see a photo of a Black man showing emotions and showing feelings is something that you don't see often, and I felt that that was one of the things that we really needed to blast out. We need to show that Black men do have feelings and emotions too. Black people are human. So, I wanted to put our humanity back by showing him in that emotional embrace," said Jordan.

Vashon is hopeful that his photos will be seen by future generations and will show a revolutionary time in history.

"In the future, I want young Black boys and girls to see that people who came before them fought for them to be where they are today. For me, covering protests just opened my eyes to the work that we need to do to make a better tomorrow and succeed. We have to understand that it's going to take all of us to save us and we have to come together in order to move forward as a nation," Jordan said.