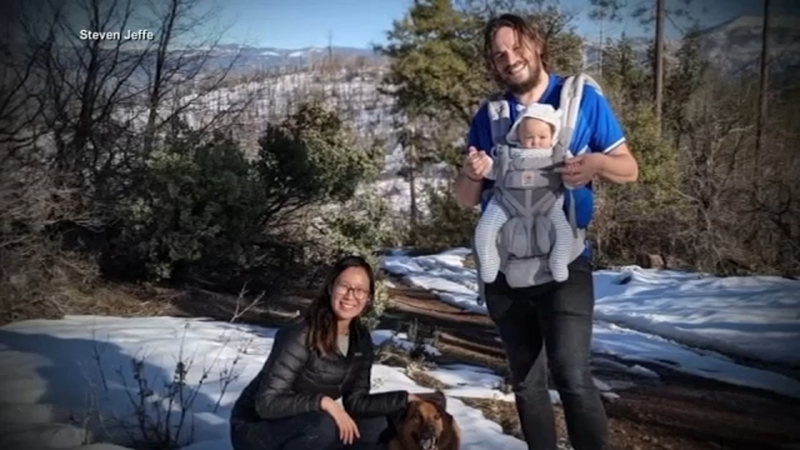 MARIPOSA COUNTY, Calif. -- A Central California couple who was found dead with their one-year-old and dog on a hiking trail in Mariposa County last August likely died while trying to save their child in the extreme heat, an investigative report revealed.

The report obtained by ABC30 details the months-long investigation by the Mariposa County Sheriff's Office into the family's death.

Hyperthermia is when your body produces more heat than it can release, and bodily functions begin shutting down.

The Gerrish family and their dog were found dead in one area along the trail while Chung was found further down the trail, the report said.

A professional wilderness survival and first aid instructor, an expert witness for the investigation, told investigators they believe the baby may have exhibited illness first and that one parent stayed to help the child while the other went for help.

"A suffering infant would give two parents the drive to push through the extreme heat," the witness said. "When one could no longer continue, they stayed behind to care for the child and pet, while the other tried to forge on and get help for their loved ones. It is a tragedy of the highest order."

Another witness told investigators they saw the family's truck going toward the trail on August 15, around 8 am. The temperature at that time was 75 degrees at an elevation of about 3,800 feet.

The family walked about 2.2 miles down the trail to an elevation of about 1,900 feet, where temperatures jumped from 92 to 99 degrees.

The trail was steep, and temperatures were warmer than hikers would likely expect unless they were familiar with it.

An experienced hiker who spoke with detectives said they would stay out of the canyon from June to September due to the strenuous hike and heavy exposure to the sun and heat, the report said.

Authorities say the family had been carrying one 85-ounce water container. It was empty, and they had no other water with them.

Water samples from the region were collected as part of the sheriff's office investigation. The results found toxins within the water, but investigators do not believe the family had ingested it.