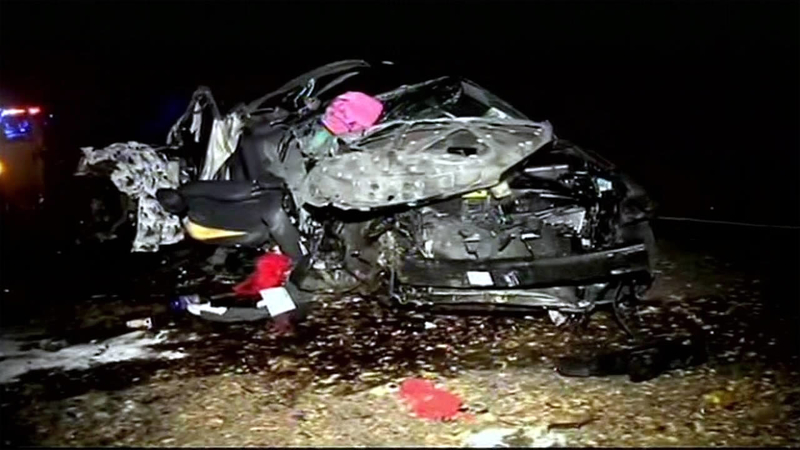 MARTINEZ, Calif. (KGO) -- The CHP is investigating a crash that killed two teenage girls and injured another in Martinez early Sunday morning.

Officers said the driver was transported to John Muir Medical Center in Walnut Creek with major injuries. They said the driver fell asleep before her car slammed into a tree, killing her friends. "The way that the car struck the tree, it really was a severe impact to the passenger side of the vehicle, kind of sparing the driver side of the vehicle. So with the airbag deployment and probably safety restraints that the driver had on, she was able to survive the collision," CHP Sgt. Ken Martin said.

The victim's friends reacted to the news of the terrible crash involving there three classmates from College Park High School in Pleasant Hill. "It's terrible because I've known some of these people for a really long time," Jack Railton said.

Officials have not released the names of the victims.

Grieve counselors will be at the school to help students cope with the loss on Monday.

Franklin Canyon Road is now quiet. A small plant and a crucifix marks the spot of the horrific accident.

Officials said drugs or alcohol don't appear to be a factor in the crash.

Friends at College Park High School said the girls will never be forgotten. "They were really good people, like they're always smiling and they're really nice to everyone," Railton said.

"We both had classes with some of them, it's knowing that they're gone is a big deal, it's sad for everyone," Corey Rumbaugh said.

Many said there were Halloween parties on Saturday night, but they don't know where the three girls were going at such a late hour and police can't say either.

"A lot of bad stuff happens at 3 a.m., but I don't know what the circumstances were in this particular incident,"