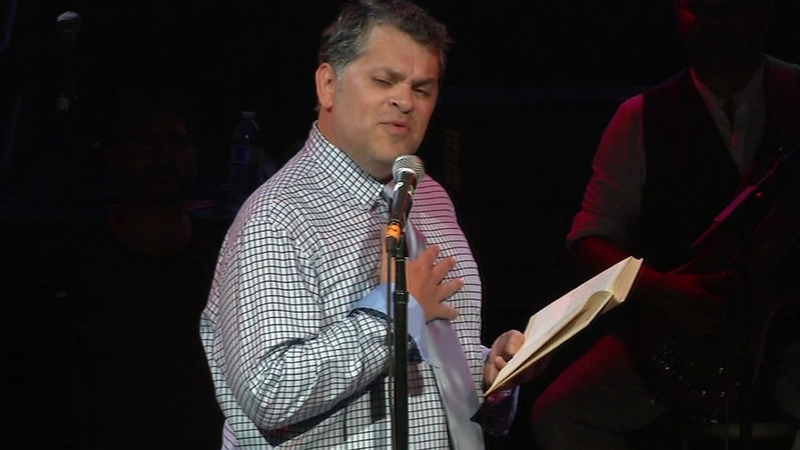 SAN FRANCISCO (KGO) -- Twice a month, in San Francisco and Oakland, standing-room-only crowds turn out to hear adults read diaries they wrote as teenagers. The show is called "Mortified." Organizers describe it as a combination comedy show and group therapy. It is so popular it will celebrate its tenth anniversary in the Bay Area next month.

Amanda Janick is a Santa Rosa mother of two and a Mortified regular. She told us, "There is something very therapeutic about being up there, sharing these really awkward, embarrassing things that you thought about when you were a kid and they were so important and serious to you at the time, and now they are ridiculous."

On the night ABC7 attended the show, Janick shared poetry she wrote as a lovesick 12-year-old. The audience screamed with laughter as she read choice lines including: "My silky white flesh is yours." and "She flirts with your warped emotions. She knows not when to stop."

The diary entries range from teens obsessed with soap operas to mean-girl summer camp experiences to romance and sex. One man played audio tapes of a radio show he made as a teen. After each reading, members of a group called Freeze use what they just heard to do an improv comedy-freestyle rap.

Mortified started in Los Angeles as a one-time experiment. It was a hit that soon launched in a dozen other cities, including San Francisco and Oakland.

Mortified's Bay Area producer Scott Lifton says it is part of the emerging storytelling scene. Lifton says the show is perfect "for a generation that doesn't want to go to expensive theater per se, but want to be entertained."

Lifton is planning a big tenth anniversary show December 4th at the DNA Lounge, with many past diary readers returning.

Lifton believes Mortified's long running success is because almost everyone can relate to the feelings expressed in the teen diaries. "Even if the person is a different race, gender, or sexual preference, they were awkward and confused (as teens). I think all of us pretty much didn't know what we were doing at the time."

Kerrigan Steger of Columbus, Ohio said the show he saw was a "belly laugh. A child is so honest, and their emotions are raw."

Rebecca Truong of San Francisco was also enthusiastic. "I love how captivated the audience is and how welcoming everyone is to all of the (diary reader's) different stories."

Be ready for a lot of bad language and talk about teenagers' lusty desires, but there's also opportunity for empathy.

Beyond the live show, there's a movie called "Mortified Nation" and a podcast that invites you to share the shame at any time.

The people who read their diaries are not paid, but they are screened in advance. Some come back again and again.

"Some are willing to share, and some just really want to listen, but everyone's got a story to tell," says Janick. She is now organizing a new Mortified chapter in Sonoma County.

For information about the 10th anniversary Mortifies show click here. There are shows at 7 p.m. and 10 p.m. Prices range from $17-$25. Audience members are warned to be prepared for adult language and subject matter.