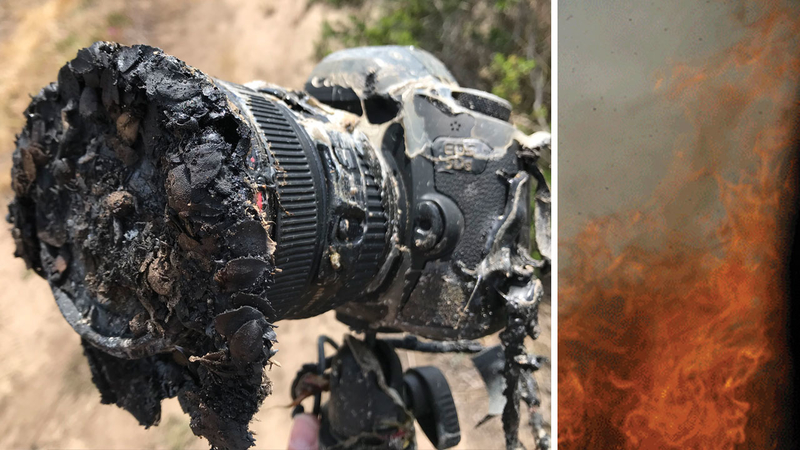 NASA camera engulfed by flames but its photos survive

VANDENBERG AIR FORCE BASE, Calif. -- A NASA camera was overrun by flames as it shot a recent launch, but its photos survived to show its fiery last moments.

The camera in question was one of six that longtime NASA photographer Bill Ingalls set up around Vandenberg Air Force Base to cover the May 22 launch of the agency's GRACE-FO mission. The launch, which took place a quarter of a mile away, ignited a grass fire that quickly spread to the area where the camera was set up and engulfed it in flames.

When Ingalls went to retrieve the camera, he found its body melted, though he managed to remove the memory card from its charred remains.

Footage released by NASA shows several frames of smoke rising from the launch site before orange flames begin to singe nearby vegetation and creep toward the camera. As the camera is overwhelmed by the inferno, its plastic casing is seen melting over the lens until the camera stops recording.

NASA said in a blog post that the melted camera will likely be put on display at its headquarters in Washington. The other five cameras, which ironically were all closer to the launch than the one that burned, were not impacted by the fire.
Report a correction or typo
Related topics:
sciencesanta barbara countywhat's trendingrocket launchbuzzworthynasafiretechnologyspacephotographycalifornia
Copyright © 2022 KGO-TV. All Rights Reserved.
TOP STORIES
SF LGBTQ+ police say they will not march in annual Pride Parade
Pfizer: COVID vaccine for kids 6 months to 5 years old 80% effective
ABC7's new 24/7 live stream offers local news, weather
2 women killed, man injured after taxi cab hits pedestrians in SF
Texas woman sought in fatal shooting of SF pro cyclist: US Marshals
Red Flag Warning to go into effect for parts of Bay Area Monday
'Absolutely terrified' SJ teen boy dies hours after 'sextortion' scam
Show More
'I fought': Trevor Reed describes his survival in a Russian prison
Biden: Monkeypox threat doesn't rise to level of COVID-19
More than 75,000 pounds of baby formula lands in US amid shortage
135-acre brush fire in Solano County 90% contained
Warriors beat Mavs 109-100, one win away from NBA Finals
More TOP STORIES News