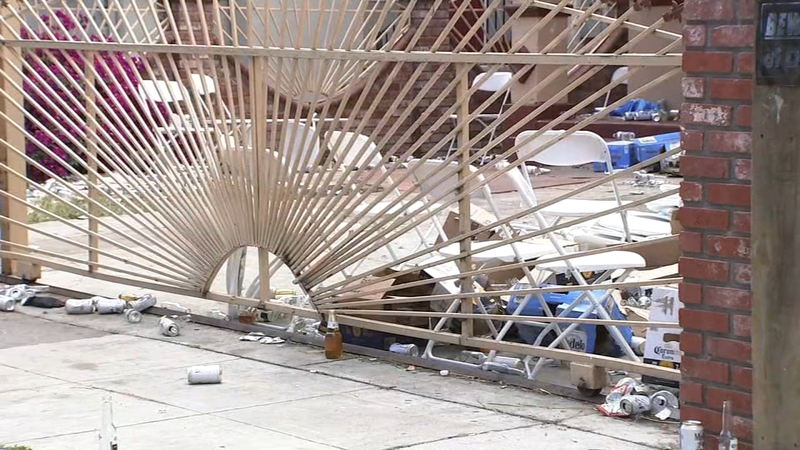 RICHMOND, Calif. (KGO) -- Richmond police now say they are looking for at least two suspects in a shooting rampage that killed three people and injured five others last night outside a house party.

The uncle of one of those killed told ABC7 News, the gathering was what is known as a Marimba party, a Guatemalan music and dance party.

#DEVELOPING Chaotic scene in aftermath of shooting that killed three and injured five in #Richmond ⁦@RPDCAOnline⁩ say two suspects walked up and opened fire on 80-100 party-goers. Suspects got into nearby car. No arrests. Relative of one victim says it was Marimba party. pic.twitter.com/jZkHaLNI84

Neighbor Isela Zamora heard lots of popping, what she thought were fireworks, coming from outside this home Sunday evening, only to find out later, some of those were gunshots.

"Sounded kind of like explosions, firecrackers," said Zamora. "My sympathy goes to the family members. My heart goes to them, the ones who lost a family member. Also to those who are in pain."

#DEVELOPING “My heart goes to them, the ones who lost family members… “ neighbor who lives near home where 8 people shot during house party Sunday in #Richnond Three people died.. #abc7now pic.twitter.com/VTV5aFOnfN

Three men are dead, and one hospitalized, and four others treated and released after an all-day party on Richmond's Dunn Avenue was interrupted by gunfire just before 11 p.m.

Three people have died and five others are wounded after a shooting late Sunday night at a large house party in Richmond, police said.

Speaking in Spanish, one man told us his uncle was one of those killed. He said the uncle was about 37 years old, a man who sold fruit in the area.

"There's no indication that the suspects were at the party at any time," said Richmond Police Lt. Matt Stonebraker. "It does appear that they did walk up on scene and then get into a nearby car." Stonebraker added that the shooting definitely appeared to be targeted, and that as few as six rounds were fired.

Next door neighbor Mario Moreno said when he left in the afternoon, there was a large and loud celebration, but when he returned hours later, the scene was chaotic and surrounded by police.

"Right when I got here to my front door, I see a dead body right there," said Moreno, pointing to an area on the sidewalk in front of his gate. "I freaked out. My heart started pumping."

Police say one of the complicating factors in the case is that the party was advertised on Facebook, which means party-goers of about 80-100, came from all over the Bay Area and were in many cases, unknown to one another.

Mayor Tom Butt believes recent reductions in the police force have hindered the city's ability to pick up on attacks like Sunday's, before they happen.

"I think there's a direct relationship between having a robust police force that can do effective community policing and having events like we had last night," said Butt, who explained a force that was comprised of 195 officers in 2014 is now down to 145, due to attrition and budget cuts.

Anyone with information is asked to contact Richmond police or CrimeStoppers.