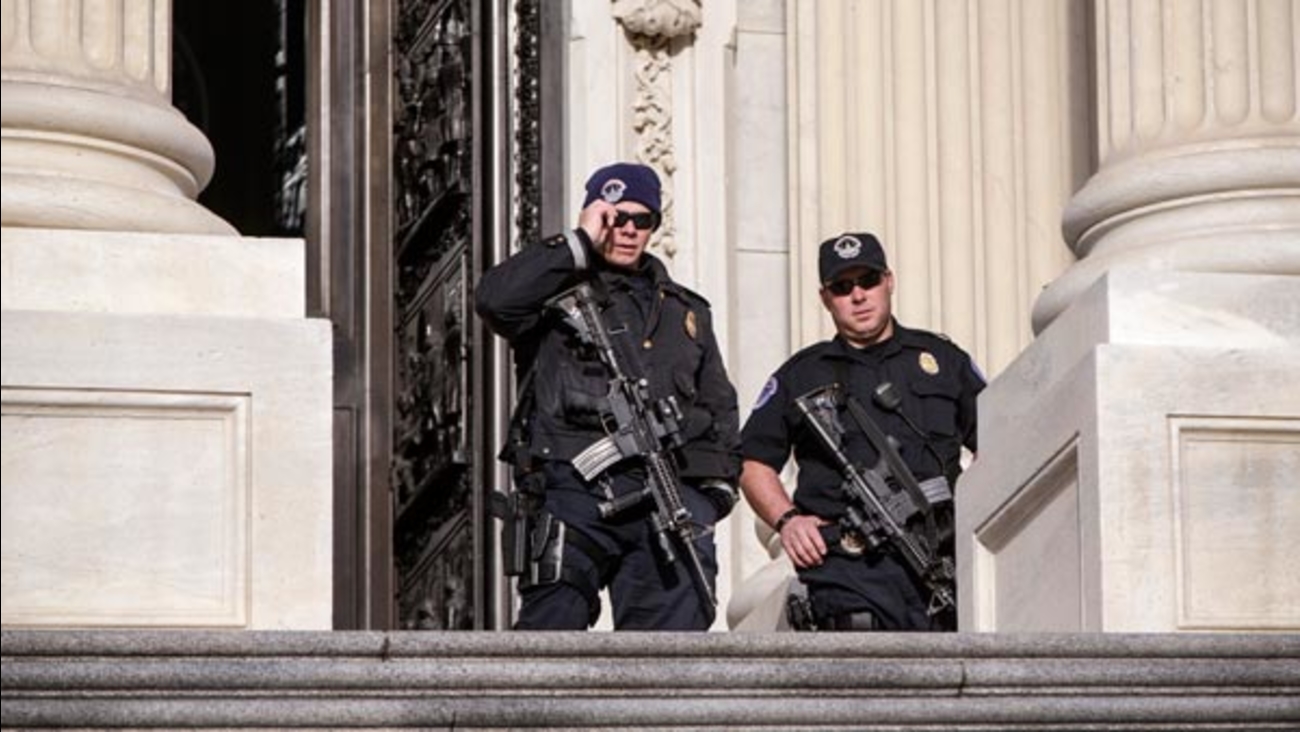 U.S. Capitol Police officers stand guard outside at the entrance to the House of Representatives on Capitol Hill in Washington, Tuesday, March 22, 2016. (AP Photo/J. Scott Applewhite)

BRUSSELS -- The Obama administration stepped up security at major transit hubs across the country after Tuesday's airport and subway bombings in Brussels, as top U.S. intelligence officials warned of the risk for copycat attacks at home. President Barack Obama vowed to help Belgium track down those responsible for the deadly explosions.


Homeland Security Secretary Jeh Johnson stressed there is no "specific, credible intelligence" pointing to a similar plot in America, but he said the Transportation Security Administration would deploy additional security at major airports and rail stations in different cities. Officials also reviewed additional security measures for travelers from Belgium, among more than three dozen countries whose citizens generally don't need a visa to enter the U.S.

NEW: State Dept "alerts U.S. citizens to potential risks of travel to and throughout Europe" after #Brussels attacks pic.twitter.com/A0YzTxk9cM

The State Department warned Americans about potential risks to travel in Europe. "Terrorist groups continue to plan near-term attacks throughout Europe, targeting sporting events, tourist sites, restaurants and transportation," it said in a statement. Officials advised U.S. citizens to "exercise vigilance" in public places or on mass transportation and to take "particular caution" during religious events or large events.

The attacks in the Belgian capital underscored the growing threat posed by the Islamic State group on both sides of the Atlantic. The bombs in Brussels' airport and subway locked down the European Union's capital just a few months after attacks shocked Paris and San Bernardino, California.

"We will do whatever is necessary to support our friend and ally Belgium in bringing to justice those who are responsible," Obama declared in Havana, where he was closing his historic, three-day visit. The attack immediately overshadowed events on the island, with Obama addressing the tragedy at the top of a keynote speech to the Cuban people and again at an exhibition baseball game.

"The world must unite," Obama said after offering his condolences in a telephone call with Belgian Prime Minister Charles Michel. "We can and we will defeat those who threaten the safety and security of people all around the world."

Several Americans were injured, including an Air Force officer and his wife and four children who were at the airport. The service member is stationed at Joint Force Command Brunssum, in the Netherlands, but the military wouldn't identify him by name. Officials said he was a lieutenant colonel.

Mormon church officials, meanwhile, said three of its missionaries from Utah were seriously injured in the blasts and were hospitalized. They were identified as Richard Norby, 66, of Lehi; Joseph Empey, 20, of Santa Clara; and Mason Wells, 19, of Sandy. They had been serving in Paris and were at the airport with a fourth missionary who was on her way to an assignment in Ohio.

Secretary of State John Kerry, accompanying Obama in Cuba, said in a statement the U.S. was working to determine the status of all Americans in Brussels. The embassy there issued a statement telling U.S. citizens to stay where they are and "take the appropriate steps to bolster your personal security."

In the United States, the Homeland Security Department said it could further enhance security measures "as appropriate, to protect the American people." It urged Americans to report any suspicious activity to law enforcement authorities.

Johnson said last week that officials were monitoring world events while evaluating whether to raise the nation's security posture or issue another bulletin via the government's National Terror Advisory System. A bulletin was issued in December after American-born Syed Rizwan Farook and his Pakistani wife, Tashfeen Malik, killed 14 people in San Bernardino.

The administration has described the couple as radicalized Muslims inspired by the Islamic State and other extremist groups, but hasn't linked them to any terrorist cell or network.

Rep. Adam Schiff of California, the House Intelligence Committee's top Democrat, said the threat of copycat or lone-wolf attackers may get worse as the Islamic State faces increased military pressure by the U.S.-led air campaign in Iraq and Syria.

"In terms of targets, this may be one of the most dangerous phases," Schiff told The Associated Press shortly after being briefed on the attacks. "ISIS is facing pressure on the battlefield and they are suffering defeats. To enhance their prestige ... they feel the need to lash out at Western targets."

Schiff said it was unclear how closely the Islamic State's leadership in Raqqa, Syria, would have been involved in planning for such an operation. While the group has helped supply and train fighters who've returned to Europe with terrorist intentions, he said the attackers operate with "significant, real autonomy when it comes to when and where to attack."

The early indications, he said, suggest the perpetrators were of North African background and may have been Belgian or French citizens.

Intelligence agencies have been bracing for months for possible attacks in Belgium, especially since last week's arrest of accused Paris attack conspirator Salah Abdeslam, a Belgian-born Frenchman of Moroccan descent.

Schiff said the Brussels plot probably was already underway before Abdeslam's arrest. But his apprehension by authorities may have sped up the plan.

Sen. Angus King, I-Maine, a member of the Senate Intelligence panel who was traveling in Europe with other lawmakers focused on combatting terrorism, told the AP there was avid discussion about greater cooperation in sharing information on extremists.

"Our impression has been from our discussions that although the agencies within the countries are working more closely together, between the countries there is still distrust and reluctance to share information," King said.