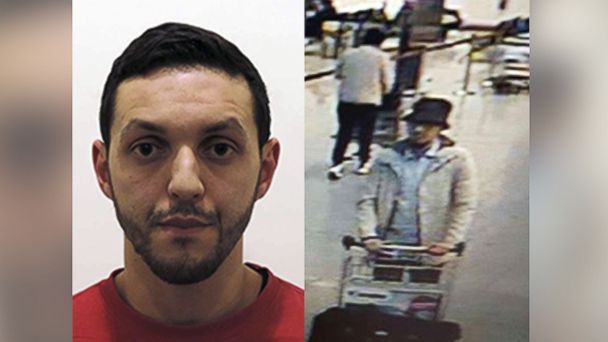 PARIS -- After nearly three weeks of frantic searching, Belgian authorities announced Saturday they had finally identified the elusive "man in the hat" spotted alongside the two suicide bombers who blew themselves up at Brussels Airport: It was Paris attacks suspect Mohamed Abrini.

Belgium's Federal Prosecution Office said the recently detained Abrini - the last identified suspect at large from the deadly Nov. 13 Paris attacks - had also confessed to being the vest- and hat-wearing man linked to the Brussels bombers whose image had been widely circulated by authorities.

"After being confronted with the results of the different expert examinations, he confessed his presence at the crime scene," they said in a terse statement.

The revelation that a Paris attacks suspect escorted two of the Brussels bombers to their deaths at the city's airport is the strongest sign yet that the Islamic State attackers who brought mayhem to both European cities - killing a total of 162 people - were intimately linked.

Abrini, 31, was one of four suspects charged Saturday with "participating in terrorist acts" linked to the March 22 Brussels bombings that killed 32 people and wounded 270 others at the airport and in the city's subway.

The prosecutors said Abrini, a Belgian-Moroccan petty criminal who was detained Friday in a Brussels police raid, threw away his vest in a garbage bin and sold his hat after the March 22 bombings.

Prosecutors did not respond to calls seeking further details. A legal representative for Abrini could not be immediately located for comment Saturday night.

Surveillance footage placed Abrini in the convoy with the attackers who headed to Paris ahead of the Nov. 13 massacre that left 130 people dead and hundreds wounded in the French capital.

Abrini was a childhood friend of Brussels brothers Salah and Brahim Abdeslam, both suspects in the Paris attacks, and he had ties to Abdelhamid Abbaoud, the Paris attackers' ringleader who died in a French police raid shortly afterward. Brahim Abdeslam blew himself up in the Paris bombings while Salah Abdeslam was arrested in Brussels on March 18 - four days before the attacks there - after a four-month manhunt.

Abrini's fingerprints and DNA were not only in a Renault Clio used in the Paris attacks but also in an apartment in the Schaerbeek neighborhood of Brussels that was used by the airport bombers.

Abrini was also believed to have traveled to Syria, where his younger brother died in 2014 in the Islamic State's Francophone brigade.

One European security official told The Associated Press that Abrini made multiple trips to Birmingham, England, last year, meeting with several men suspected of terrorist activity. The official spoke on condition of anonymity because he was not authorized to provide details about the investigation.

Abrini and three other men - identified as Osama Krayem, Herve B. M. and Bilal E. M. - were all charged by Belgian authorities earlier Saturday with participating in "terrorist murders" and the "activities of a terrorist group" in relation to the attacks. Two other suspects arrested in the last couple of days were released "after a thorough interrogation," the prosecutors said in a statement.

Osama Krayem, identified by prosecutors only as Osama K., is known to have left the Swedish city of Malmo to fight in Syria. The prosecutor's office accuses him of being the second person at the March 22 attack on the Brussels subway station that killed 16 people and of being at a shopping mall where the luggage used in the airport bombings was purchased.

Krayem had earlier been identified posting photos from Syria on social media, according to Magnus Ranstorp, a counterterrorism expert at the Swedish National Defense College.

"He also tried to recruit people in Malmo," Ranstorp told The Associated Press.

Swedish officials had no immediate comment on the suspect.

An African link also emerged Saturday; prosecutors described Herve B. M. as a Rwandan citizen arrested at the same time as Krayem and accused him of offering assistance to both Abrini and Krayem.

There was no immediate comment from the Rwandan government, but the African nation arrested several people on suspicion of IS links in January.

The developments Saturday were rare successes for Belgian authorities, who have been pilloried for mishandling leads in the bombings investigation. But despite multiple arrests, Brussels remains under the second-highest terror alert, meaning an attack is still considered likely.

"There are perhaps other cells that are still active on our territory," Belgian Interior Minister Jan Jambon told RTL television on Saturday.