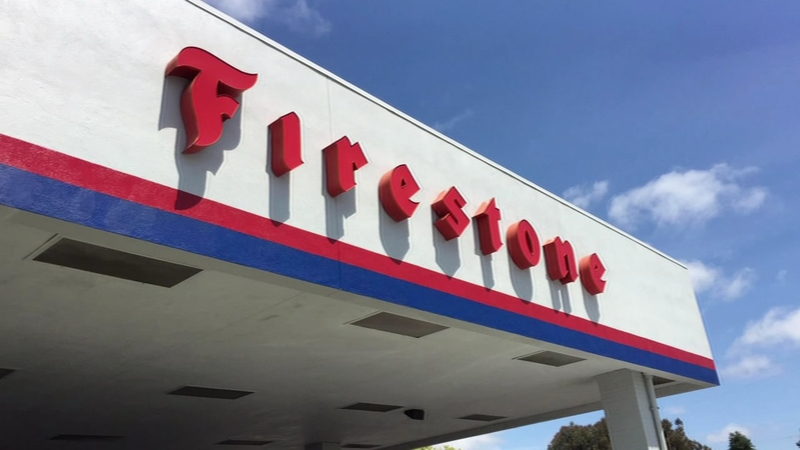 HAYWARD, Calif. (KGO) -- State regulators have accused 21 California Firestone shops of fraud and failing to install important safety features on new tires. Six of those shops are in the Bay Area. Another Firestone location, at Southland Mall in Hayward, is also accused of fraud and charging for unnecessary services.

The accusations follow two years of undercover investigation by the California Bureau of Automotive Repair, starting in 2013. First, agents did five undercover runs at the Southland Mall location. Bill Thomas with the bureau's Auto Repair Enforcement Division says the agents posed as customers, using cars from a secret state auto lab. "What we basically do is replicate the consumer experience. We prepare a vehicle to appear as a normal vehicle being driven by any California consumer on a daily basis."

According to state documents, the agents asked for a smog check, oil change or minor repairs. They allege Firestone employees then tried to sell many other services the cars did not need, with price tags from $70 to $2,600 dollars.

Bureau Chief Pat Dorais says just as the Hayward investigation was wrapping up, agents got a tip about a serious issue at other Firestone locations. "A very simple part, but a very important safety feature of the vehicle that wasn't being installed on it."

Dorais is referring parts related to the Tire Pressure Monitoring System which is supposed to trigger a warning light if your tire is running low on air. The federal government has required tire pressure monitors on new cars since 2007. They are considered a critical safety feature, but need servicing when you buy new tires.

Some types of cars just need new rubber valve stems with new tires. Other cars require a kit with replacement parts to make sure everything is sealed up properly. State investigators say some Firestone stores were charging customers for new valve stems or kits, but not putting them on the tires, and, in some cases, even selling the wrong parts.

Bureau officials say the team did more than thirty undercover runs at Firestone stores all over California. In each case they bought at least one new tire and had it installed. State documents allege 21 stores, including six in the bay area, charged for parts related to tire pressure that were never installed.

In all, the state found more than a hundred causes for discipline, including repeated fraud. According to Thomas, this is a safety issue "because if (the tire pressure monitoring system is) not operating correctly, a consumer may not be aware of a low tire and experience a tire failure and be put in a hazardous condition."

State officials originally asked a judge to revoke or suspend the licenses of all the Firestone stores involved. They have now have reached a settlement with Firestone - but details are not expected to be finalized and made public until next month.

Bridgestone, the company that owns Firestone, refused to do an interview - but sent the following statement:

"Bridgestone Retail Operations owns and operates more than 2,200 tire and automotive service centers nationwide. Each day, our 23,000 employees work hard to earn the trust and loyalty of our customers. At Bridgestone, we have no greater business objective than to ensure our customer interactions are guided by honesty and integrity."

"Bridgestone was notified by the California Bureau of Automotive Repairs ("BAR") as to certain deficiencies found to exist at some of our Firestone Complete Auto Care locations. In response, Bridgestone immediately launched an extensive internal investigation and shared our findings with BAR. Bridgestone subsequently implemented appropriate corrective actions and refined operational processes, including additional training for our employees, in an effort to continuously improve the level of service we provide to our customers in California and nationwide."

"We are grateful for the guidance provided by BAR and the opportunity to address the deficiencies. Bridgestone is pleased to report that all of the Firestone Complete Auto Care locations in question are operating in full compliance with BAR requirements and guidelines."

The state documents involved can be found by clicking here.