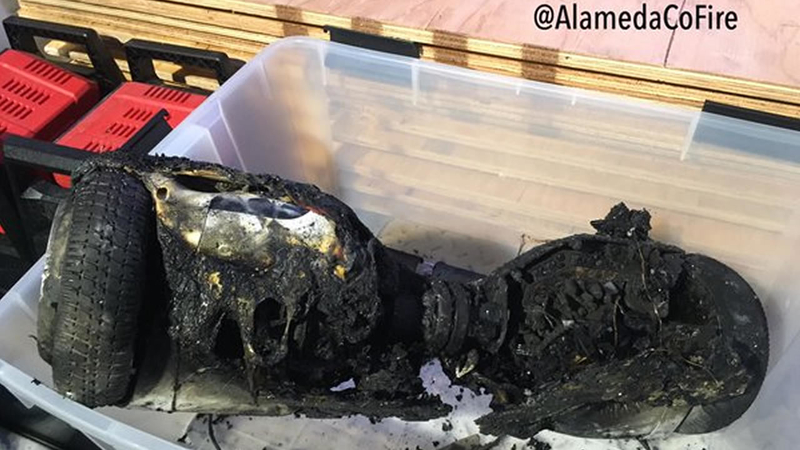 PETALUMA, Calif. (KGO) -- It has happened again -- investigators say a charging hoverboard has caused another destructive fire. There have now been nearly 50 incidents in 20 states, including several in the Bay Area. This time there were no injuries, but that fire left an East Bay family homeless.

Euel Allen says a hoverboard that investigators believe sparked a fire that gutted his San Leandro home was a gift for his granddaughter.

"I hate that I bought it," he said. "I wouldn't purchase another one. From what I'm reading, from what I'm getting an understanding about them."

Allen bought the board just 12 days ago. On Saturday, the board was plugged into a charger in his downstairs office.

He told ABC7 News he had only left his home for 45 minutes and was out to lunch with a friend when a neighbor called to tell him his house was on fire."

"Stop selling hoverboards," said Jean Heller, the neighbor who called Allen. "They got a hoverboard for their grandkid and look, now they're homeless. It breaks my heart."

There have been 10 fires involving hoverboards in California in recent weeks; four of which were in the Bay Area. That includes fires in Petaluma another in Santa Rosa that killed two dogs.

Aisha Knowles with the Alameda County Fire Department has some advice for those charging devices with lithium batteries.

"If you need to use a cellphone timer, or an egg timer, or some sort of stopwatch so that you are charging the item within the prescribed time according to the instructions," she said.

Allen says the preliminary estimate of damage to his home is $150,000.

Owner of San Leandro home that burned up due to hoverboard fire says "I wish I'd never bought it..." pic.twitter.com/YaHL5JIrjT