KGO
By by Leslie Brinkley
OAKLAND, Calif. (KGO) -- Three arrests have been made in an overnight shooting that targeted an Oakland police officer who was driving on 880.

No one was hurt, but this has happened to dozens of drivers on several different freeways in the East Bay.

A $10,000 reward was offered for any information leading to whoever fired upon the off-duty officer overnight. By the afternoon, there were a few arrests but this has only rekindled worry about gunfire on freeways.

At 11:40 p.m. Wednesday, an off-duty Oakland police officer was fired at on southbound I-880 at 16th Ave. His car was struck but he was not injured.

Police tried to make a traffic stop but the suspect vehicle escaped into an East Oakland neighborhood.

Last year, there were dozens of freeway shootings throughout the East Bay. CHP is already investigating at least nine more incidents in 2017.

When asked if it is difficult to investigate these freeway shootings, CHP Ofc. Scott Hardman said, "Yes, very difficult. Because of the size and the scope and the cars that are out there, the fact that everything is in play as far as cars are moving."

San Pablo police just activated three new freeway cameras on I-80 as a supplement to their city surveillance. "We had two shootings on the freeway and there was a lack of witnesses and a lack of witnesses that were able to recall accurately what had happened," Cmdr. Gene Alameda said.

Pittsburg also put up 14 freeway cameras to stop crime in progress. The Contra Costa County DA's office hopes to add a vast network of wireless cameras all along I-80 and Highway 4, a hotbed they say of gang violence. The cameras would be triggered by shot spotters to turn in the direction of gunfire.
Related topics:
oaklandcrimeopdi 880officer involved shootingpolice officerfreewaypolice
Copyright © 2020 KGO-TV. All Rights Reserved.
RELATED 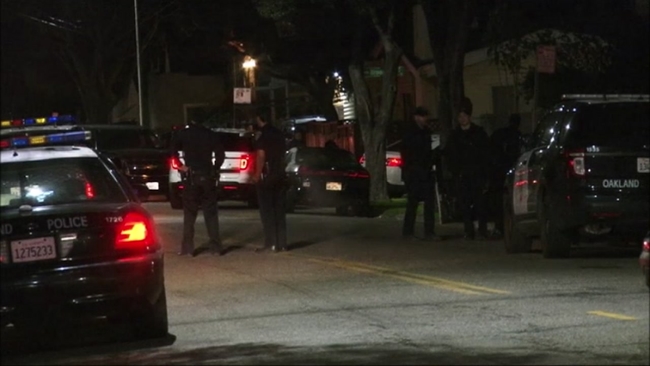 Reward offered after off-duty officer shot at in Oakland
More Videos
From CNN Newsource affiliates
TOP STORIES
Man pays $1000 to get dog back after smash and grab in SF
Missing couple found: Meet the Marin County volunteers who helped saved their lives