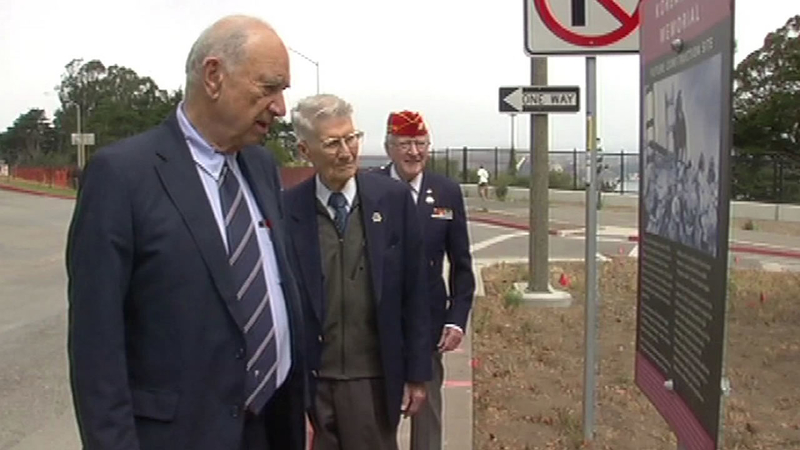 SAN FRANCISCO (KGO) -- Next week, work will begin on a San Francisco memorial many feel is long overdue for those who fought in the Korean War. The memorial will be located outside the gates of the San Francisco National Cemetery in the Presidio. It will overlook the Golden Gate Bridge.

If you take a stroll through the cemetery in the Presidio, you may notice it is a place where changes happen slowly and tend to last permanently. This week, there was a reason to celebrate as we approach a Fourth of July.

If Stevens looks familiar, it is because we have been following him for years as he tried to establish a Korean War memorial in the San Francisco National Cemetery, as he told us last year.

"We need to have people know about wars so that we can hopefully prevent wars in the future," Stevens said in May 2014.

Now that memorial is on the cusp of reality. On Friday, Stevens, along with retired judge Quentin Kopp and former machine gunner Don Reid, stood by a sign marking the spot where next week they will break ground.

For those who fought in and supported the Korean conflict, this new memorial is long overdue. Of the more than 30,000 graves in the San Francisco National Cemetery, 2,273 of them belong to Korean War veterans.

"This is called 'The Forgotten War' because I don't think history gives it the kind of attention it should," Kopp said.

It was a United Nations action in which a million Koreans died, plus more than 33,000 Americans.

Finding the land, raising the money, took Stevens and these men years.

"Well, it was a good project. It also kept me out of the house," Stevens said.