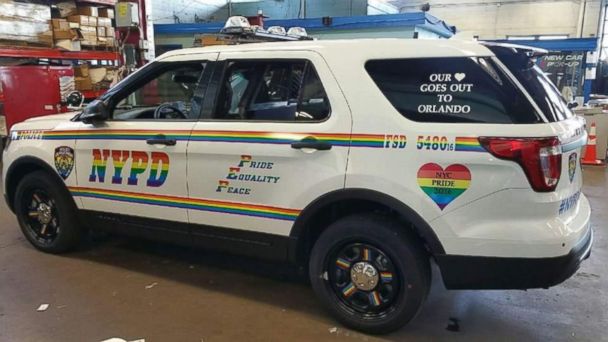 A New York Police Department vehicle has gotten a rainbow-themed makeover ahead of the city's 2016 Pride March this Sunday.

The NYPD badge on the SUV's hood is shaded in rainbow colors, as are the words "Pride," "Equality" and "Peace" on the vehicle's side. The car also features a heart sticker that reads, "NYC Pride 2016," and a decal that reads, "Our [heart] goes out to Orlando."

While some have praised the NYPD vehicle as a sign of the department's solidarity with the LGBTQ community and Orlando...

... Others have criticized it, given the police NYPD's troubled history with the LGBT community:

When asked at a news conference today if the NYPD owed the LGBT community an apology for the 1969 Stonewall raid, NYPD Commissioner William Bratton said, "I don't think so."

He said he thought a lot of "good" came out of the "terrible experience" and that the changes in the department since then, in effect, constituted an apology.