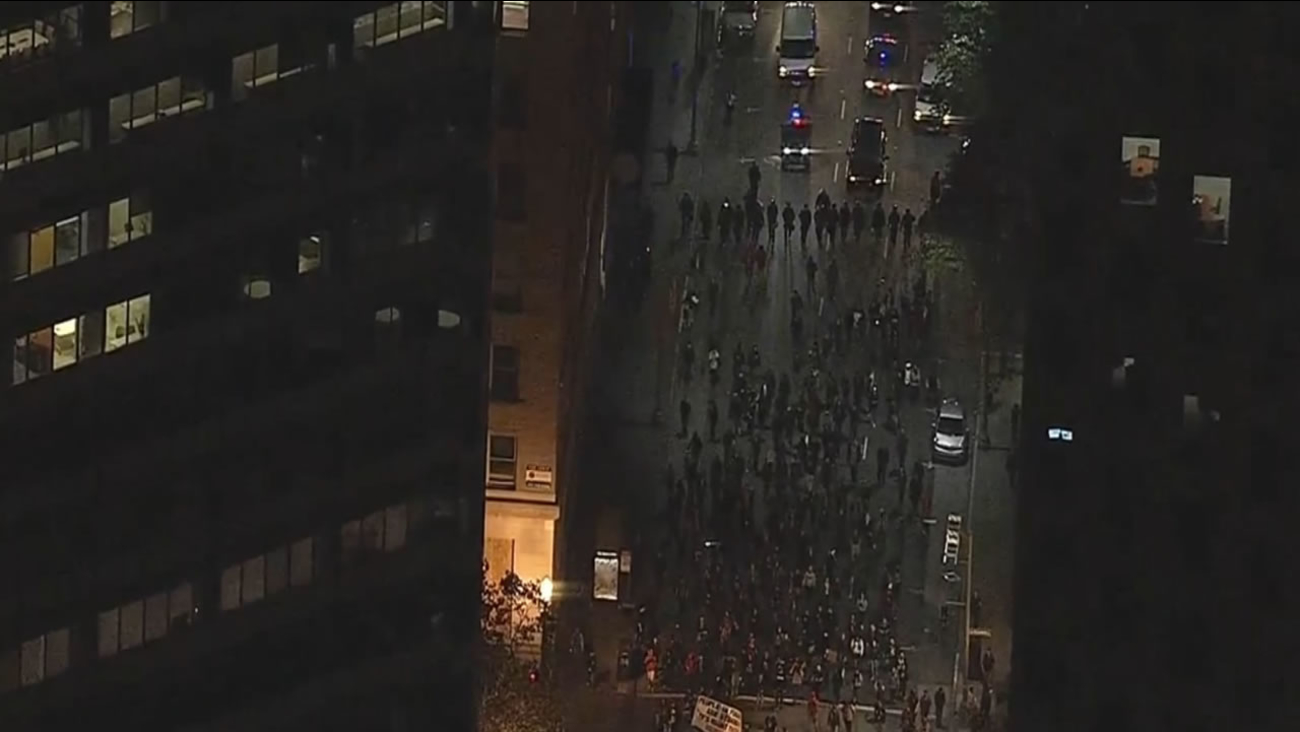 Protesters are marching in the streets of Downtown Oakland for the third night in a row.

OAKLAND, Calif. (KGO) -- About 100 people marched through Oakland streets closely followed by police Wednesday, in a third night of protests spawned by a Missouri grand jury's refusal to indict a white police officer in the shooting death of a young black man.

The group was led by two people holding a large banner that read "People In Ferguson Are Standing Up! It's Right to Rebel!" marched in Oakland's streets with more than 20 police officers on foot and at least 15 law enforcement vehicles closely behind. 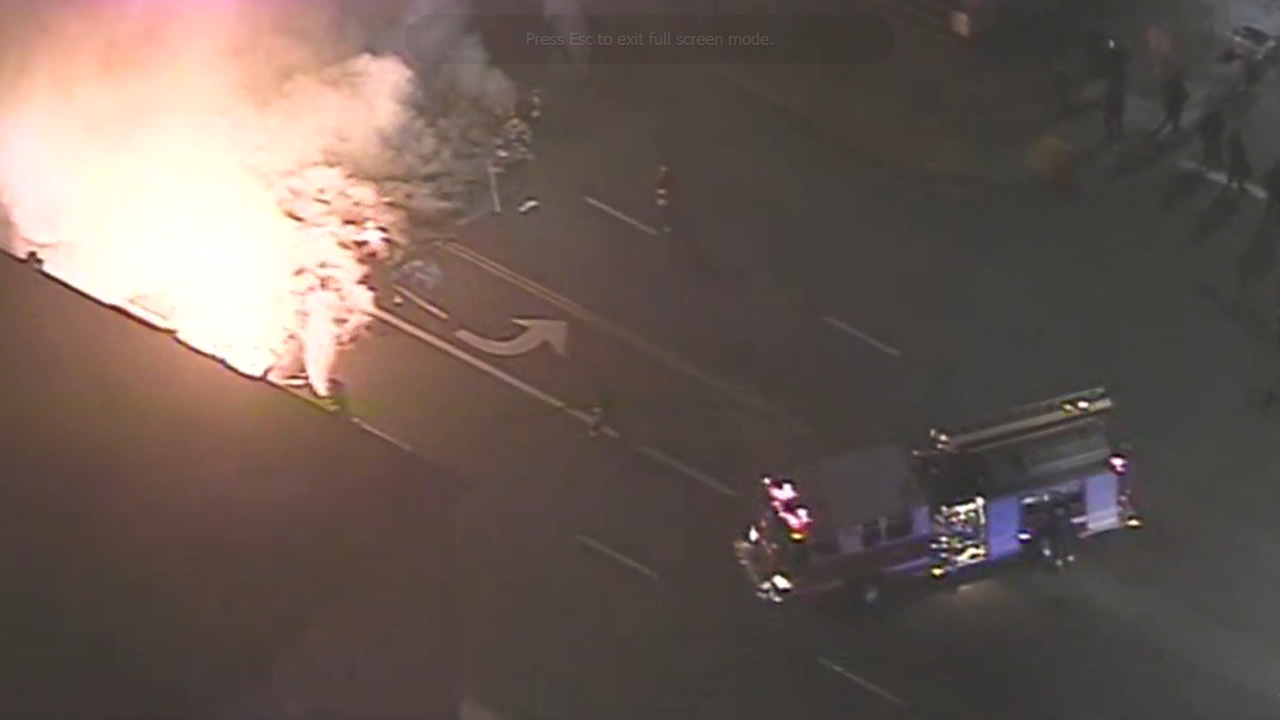 Sky 7 footage showed people marching down the streets of downtown Oakland. At various points during Wednesday's march, protesters wrote graffiti on buildings, threw rocks and smashed the windows of a CVS store on Broadway.

Police have arrested 135 people in the past 48 hours as a result of the protests on suspicion of charges including looting, vandalism, assault, failure to disperse, obstruction and obstructing a highway.

Earlier in the day, the chair of the Oakland City Council's Public Safety Committee alleged that there hasn't been adequate coordination between the Oakland Police Department and other law enforcement agencies in responding to protests the past two nights.

Councilman Noel Gallo said Oakland police officers, California Highway Patrol officers and Alameda County sheriff's deputies have all called him to say that they've been concerned about their safety during the protests and complain about what he called "a lack of cooperation" between the agencies.

"The cooperation between law enforcement agencies needs to be clear," Gallo said.

Oakland police didn't respond to a request for comment on Gallo's allegation about the lack of coordination between the agencies. The CHP and the Alameda County Sheriff's Office have helped Oakland police respond to the protests as part of a mutual aid agreement.

Hundreds of people demonstrated against a grand jury's decision not to indict officer Darren Wilson who killed 18-year-old Michael Brown earlier in August. Protesters chanting "Shut it down for Michael Brown!" briefly closed Interstates 580 and 980 Tuesday night, but Oakland police officers in riot helmets were able to clear them from traffic lanes. 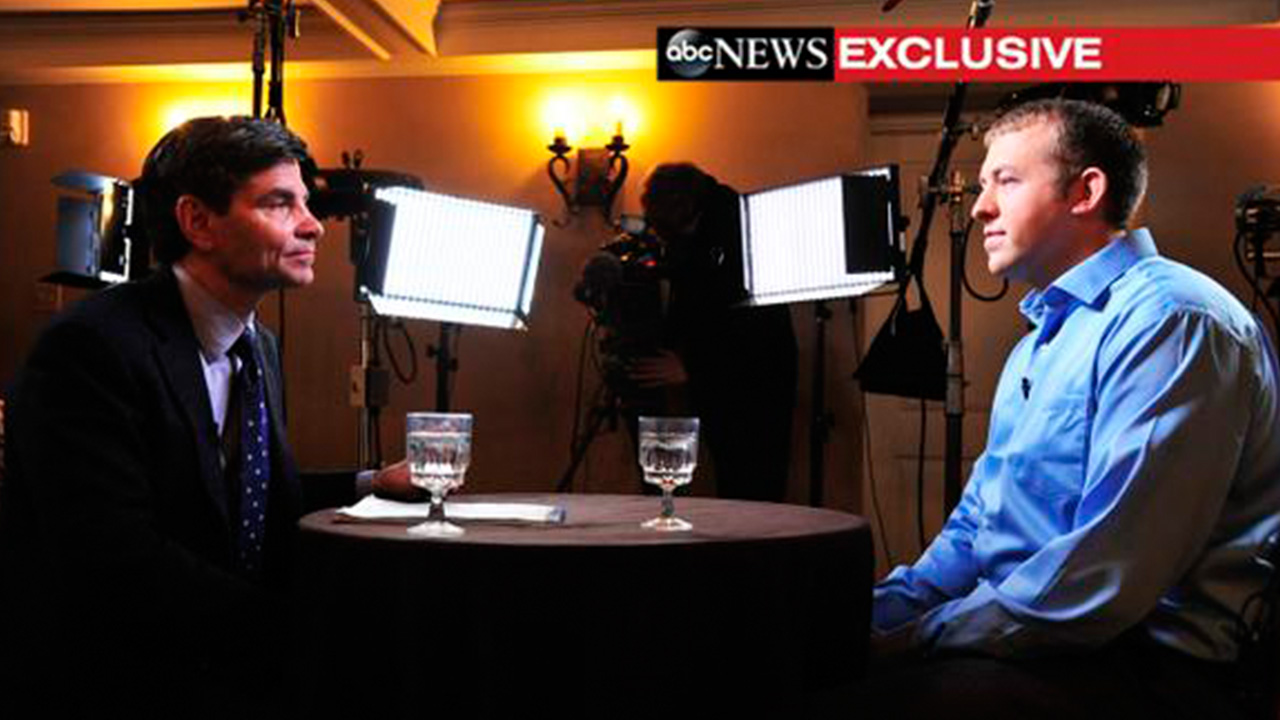 "I saw a guy with a sledgehammer running past the police cars, smashing windows two or three of them," one Oakland business owner said.

The man runs a business on Telegraph Avenue and he wished to remain anonymous for fear of retaliation. He says police were present maintaining a skirmish line, but seemed to do little else.

Also on Telegraph Avenue Tuesday night a bystander was hit in the head with a projectile. An officer's request for backup was rejected.

"I need an ambulance, Code 3 medical to 46th and Telegraph," said an officer on the audio from the dispatch call. "I have a man down in the street he's bleeding from the head," the officer said. "Forty-six years old and I need a patrol unit over here as well," the police officer said. "Negative, you are not going to send a patrol unit into 46th and Telegraph at this time," the dispatcher said.

Dispatch did end up sending an ambulance.

It's unclear why a police backup was denied, but both incidents and the looting raise questions about police strategy. 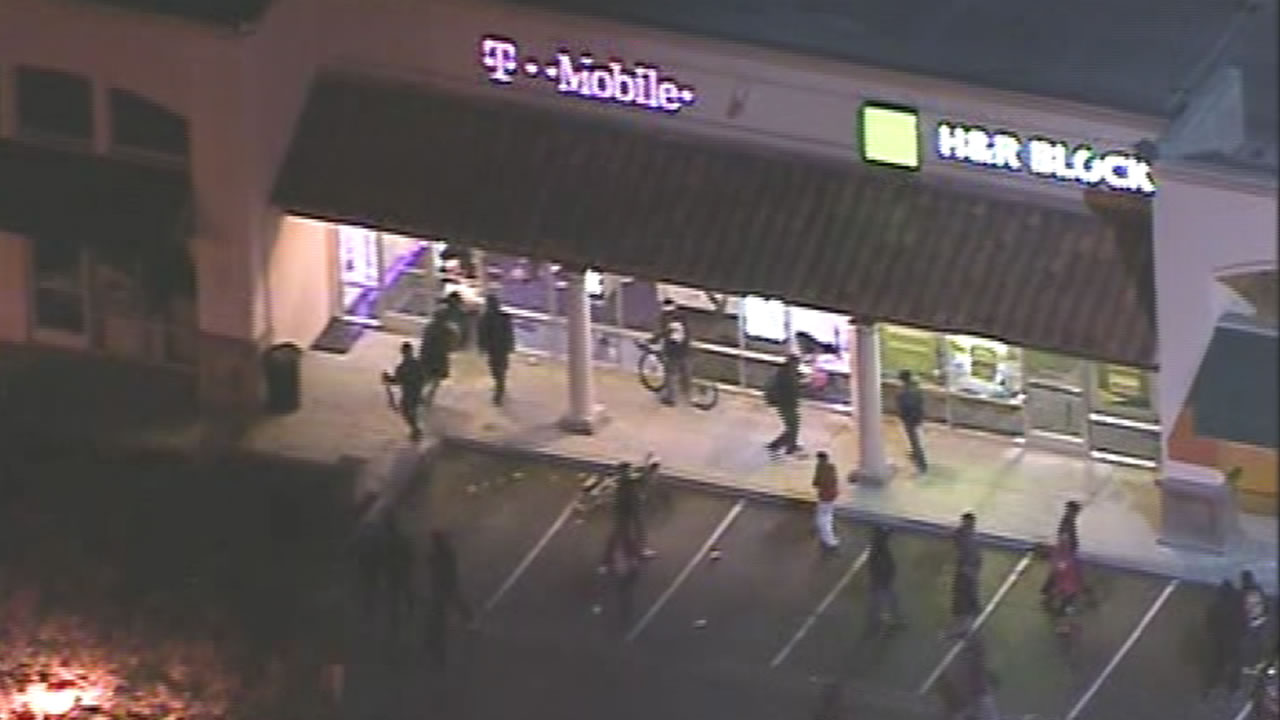 Ferguson protesters shut down highways, loot in Oakland
A peaceful march on Tuesday night in Oakland turned violent as part of the group closed the freeway, damaged buildings, and started fires.

Former San Francisco Police Chief Tony Ribera spoke with ABC7 News about police strategy in general and not about Oakland specifically. He said you have to have a plan and enough manpower to handle whatever happens.

Essentially two different contingents of officers, one to establish skirmish lines and rapid deployment units to arrest those committing crimes.

"You want to do it firm and fast. You want to go in and grab the criminals and get them the hell out of there," he said.

The CHP said they provided their special response teams who do exactly that.

We saw some of them assembling Wednesday at the CHP office in Oakland. They've been out in Oakland the last two nights. At least one of their cars was vandalized. The CHP Special Response teams were called in to take back the freeways from demonstrators.

"The biggest thing about the SRT team is that they're rapid deployment," said CHP public information officer Sean Wilkenfeld. "They can move fluidly in a situation and change very rapidly.

Oakland Police Chief Sean Whent says in future demonstrations he'll have more police on the streets to get the criminals.

"The key thing being we'd like CHP to do more of the freeway thing so I can keep the Oakland police on city streets to protect the citizens of Oakland," Whent said.


In Los Angeles nine people were arrested late Wednesday morning after they sat in a bus lane alongside the U.S. 101 freeway near downtown, police Chief Charlie Beck said.

At a press conference, Beck also released new information on arrests made overnight as groups of demonstrators roamed the central city, mostly blocking intersections, although some did run onto a freeway. There were 167 arrests for disturbing the peace and one for felony battery on a police officer, Beck said. An additional 15 juveniles were cited for curfew violations.

The Los Angeles demonstrations have been mostly noisy but non-violent civil disobedience, without major damage or property destruction.

The LAPD and the California Highway Patrol have been "extremely generous" in the leeway given protesters to exercise their First Amendment rights," Beck said.

The City of Oakland has set up Healing Centers in East and West Oakland as safe alternative venues for people wanting to engage in productive dialogue and healing around any emotions brought out by the Ferguson verdict. 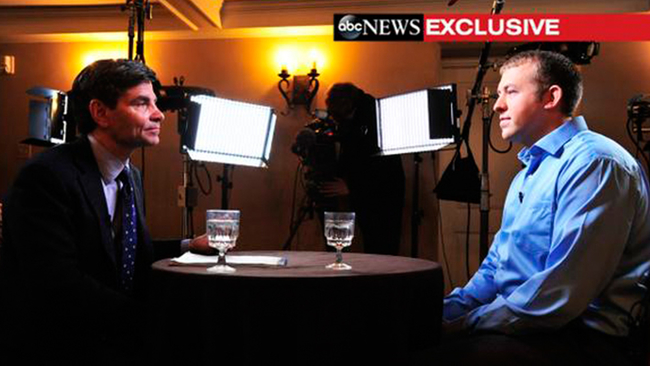 Ferguson officer: "I know I did my job right," in exclusive ABC News interview 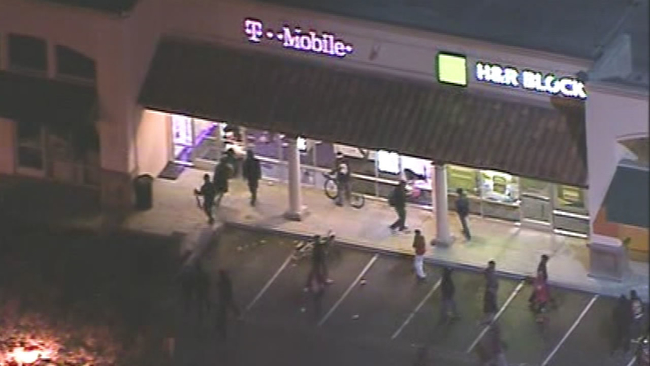 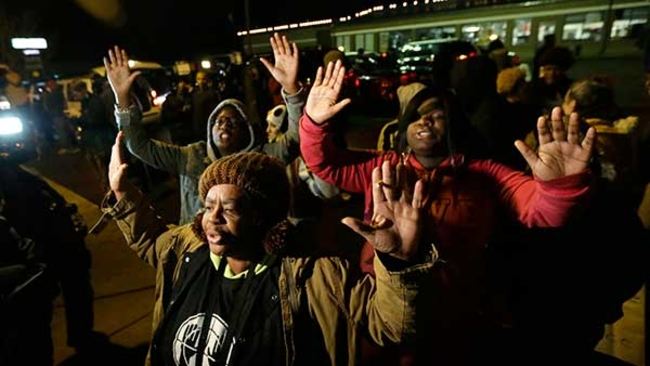 Live updates in the aftermath of the Ferguson decision 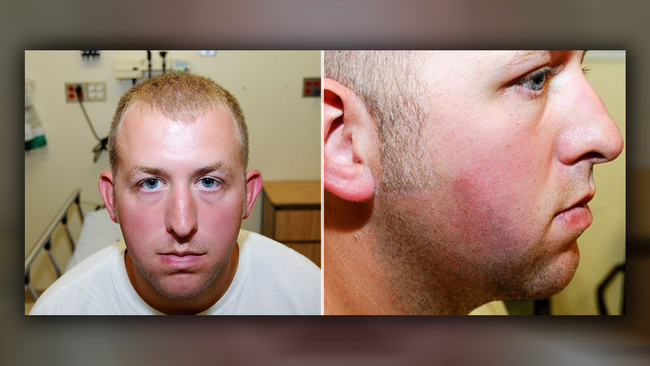