WLS
By Karen Jordan and Eric Horng
LINCOLNWOOD, Ill. -- A 16-year-old girl was charged with first-degree murder in the stabbing death of an Uber driver in north suburban Lincolnwood.

Eliza Wasni, 16, of Chicago, was charged as an adult with first-degree murder, the Cook County State's Attorney said. At an appearance in bond court, prosecutors called the attack heinous and unprovoked. Wasni was denied bail.

During her bond hearing, Cook County prosecutors said 34-year-old Grant Nelson, of Wilmette, was Wasni's third Uber driver early Tuesday morning, picking her up after she stole a knife and machete from a Walmart in Skokie.

"Only two minutes or so after picking up the defendant, she begins to hack at him and stab him from the back of the seat," said Assistant State's Attorney Michelle Cunningham.

Nelson's friends said he had decided to work Memorial Day because of the higher fares.

"It was surging. He said it's just opportunity to make some more money," said Waqas Abbasi, friend.

After being slashed and stabbed repeatedly, Nelson ran for help at a nearby Lincolnwood condo building, screaming and banging on the door.

"It was just, 'Help me. God help me, please. I'm gonna die.' At the top of his lungs," said Jay Markicic, building resident.

Prosecutors said Wasni tried driving off in Nelson's car, but hit a median. Then police responding to 911 calls found her hiding, still holding the knife and machete. They said she was told repeatedly to put them down, and when she didn't she was Tased.

The Taft High School student lived in Norwood Park with her mother. Her neighbors are in disbelief.

"Stunned. Beyond belief. This is a good neighborhood," said Patrick Sullivan, neighbor.

Nelson was rushed to St. Francis Hospital, where he died.

Nelson's younger sister Alexandra expressed their family's grief, and said they're still processing the gruesome details of his death.

"The loss of intelligence and conversation and nuance and thoughtfulness that he brought into all of our lives is going to be felt, and it will reverberate with us throughout the coming weeks and months and years, and it is not a hole that can be easily filled," she said.

Police said this was the first homicide to occur in Lincolnwood since 2006, when a man killed his brother during a domestic dispute. James B. McDurmon was convicted of murdering his brother, Lester McDurmon. James McDurmon was sentenced to 60 years in prison.

Nelson's friends said he was genuine and quick to laugh - hardly the type to be involved in a deadly encounter.
"It's overwhelming, really. It's very sad. Heartbreaking," said Mike Foley, a friend.

Foley was one of many who worked with Nelson in the restaurant industry, and he often drove for rideshare companies, including Uber and Lyft, after his shifts as a waiter. He also said Nelson sometimes spoke about the dangers of late-night driving.
"I remember him mentioning that he once had to stop and get gas in a really sketchy neighborhood. He might not have really thought anything of it," Foley said.

A little before 3 a.m., Nelson and friends were messaging on Facebook. "Sorry, I was Ubering," he wrote, in what may have been his final post.

Colleen Milner worked with him at a restaurant several years ago, but kept in touch with him through Facebook.

"It's pretty heartbreaking to hear that. That guy is super nice. One of the nicest guys you'll know. Quiet, shy, but he wouldn't do anything to anybody," Milner said.

Nelson lived with his parents in Wilmette. Nelson's family said they don't know much about what happened, but described him as gentle and wonderful. His former co-worker agreed.
"Grant's the type of person that would walk away from an altercation. He would never stay around. He would let something go and walk away," said Milner.

"He was always happy, just always a nice person. He really didn't deserve what happened to him," Foley said.

A spokeswoman for Uber released a statement Tuesday:

"We are heartbroken by the loss of one of our partners, Grant Nelson. Our deepest sympathies and prayers are with his family and loved ones during this incredibly difficult time."

A spokesman for Lyft also released a statement Tuesday:

"We're horrified by these reports and our thoughts are with those impacted. This type of violence has no place in our society. Our trust and safety team is looking into these reports, and we stand ready to assist law enforcement in their investigation. While the individual identified by police has driven for Lyft, there was no ride at the time of the incident."
Report a correction or typo
Related topics:
chicagoillinoismurderlyfthomicide investigationhomicidemacheteteenu.s. & worlduberstabbing
Copyright © 2020 WLS-TV. All Rights Reserved.
RELATED 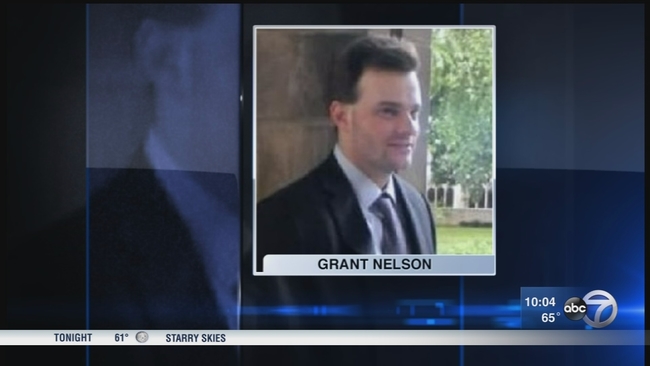