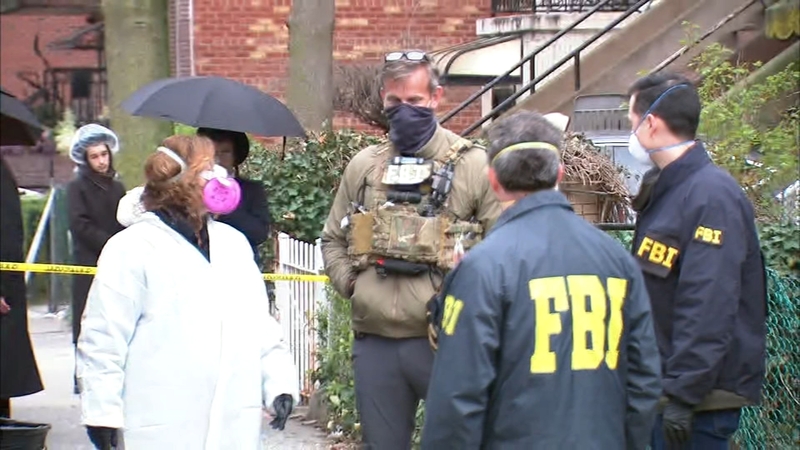 BROOKLYN, NY -- A Brooklyn man was arrested Monday for allegedly coughing on FBI agents and telling them he had coronavirus after they confronted him over his supposed hoarding and sale of medical equipment.

The suspect lied to authorities about his accumulation and sale of surgical masks, medical gowns and other medical supplies, according to the United States Department of Justice.

Baruch Feldheim, 43, was charged by complaint with assaulting a federal officer and with making false statements to law enforcement.

According to documents filed in this case and statements made in court:

In one instance, on March 18, 2020, a doctor in New Jersey contacted Feldheim via a WhatsApp chat group labeled "Virus2020!" Feldheim agreed to sell to the doctor approximately 1,000 N95 masks and other assorted materials for $12,000, an approximately 700 percent markup from the normal price charged for those materials.

Feldheim directed the doctor to an auto repair shop in Irvington, New Jersey, to pick up the order. According to the doctor, the repair shop contained enough materials, including hand sanitizers, Clorox wipes, chemical cleaning supply agents, and surgical supplies, to outfit an entire hospital.

Feldheim later told the doctor that he had been forced to move all of those supplies from Irvington to another location.

On March 23, 2020, Feldheim allegedly offered to sell a nurse a quantity of surgical gowns and directed the nurse to his residence in Brooklyn. Feldheim also received, on March 25, 2020, a shipment from Canada containing approximately eight pallets of medical facemasks.

On March 27, 2020, FBI agents observed an empty box of N95 masks outside of Feldheim's residence.

After identifying themselves as FBI agents, they told Feldheim that they wanted to stay a distance away from him given concerns over the spread of Coronavirus. When the agents were within four to five feet of him, Feldheim allegedly coughed in their direction without covering his mouth.

The agents then told him that they were looking for certain PPE materials and that they had information that Feldheim was in possession of large quantities of such materials. At that point, Feldheim told the FBI agents that that he had the Coronavirus.

Feldheim further falsely stated that he did not possess large quantities of personal protective equipment materials and that he never sold them directly to individuals.