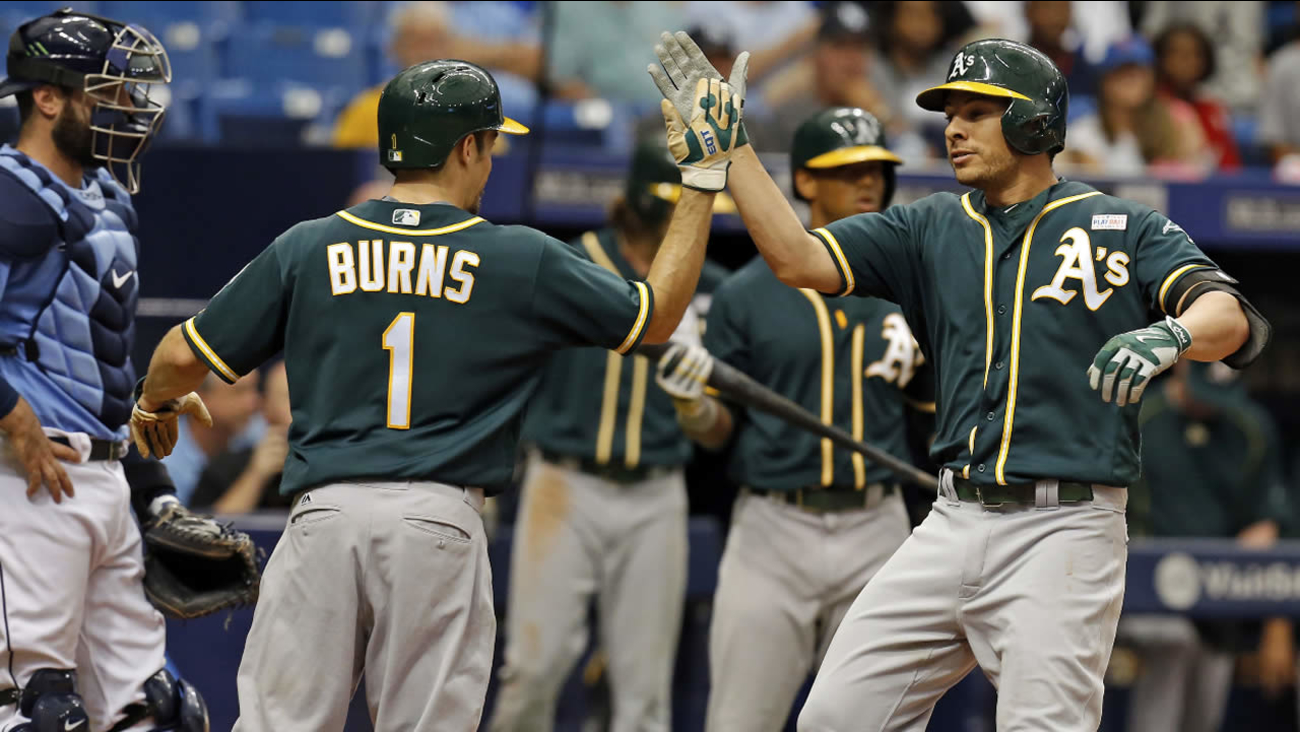 Oakland Athletics' Danny Valencia, right, is congratulated by Billy Burns after his home run scored both of them during a game, Sunday, May 15, 2016, in St. Petersburg, Fla. (AP Photo/Mike Carlson)

ST. PETERSBURG, Fla. -- Danny Valencia hit three home runs, including a two-run shot in the ninth inning that lifted the Oakland Athletics to a 7-6 win over the Tampa Bay Rays on Sunday.

Valencia's final homer - his fifth of the season, all in the three-game weekend series - came on the first pitch from Steve Geltz (0-2), Tampa Bay's fifth pitcher.

John Axford (3-1) pitched an inning for the win and Ryan Madson got three outs on four pitches for his 10th save.

Guyer homered in each of the first two innings off Sonny Gray. The second homer, Guyer's fourth of the season, came with two men on base after a two-out error on second baseman Tyler Ladendorf.

Oakland's Chris Coghlan connected for a pinch-hit homer off against Erasmo Ramirez in the seventh.

Coco Crisp had three hits for the A's, who won for only the third time in 11 games in May.

Coghlan's pinch-hit home run in the seventh was the first for the A's since John Jaso accomplished the feat on June 22, 2014, ending a streak of 285 games without a pinch-hit homer.

Athletics: INF Jed Lowrie (right shin contusion) hit off a tee Saturday, resuming baseball activities. He is eligible to be reinstated from the disabled list on May 25.

Rays: RHP Brad Boxberger (adductor surgery) pitched one inning for Class A Port Charlotte in his first rehab appearance. He gave up a hit and struck out one.

Athletics: LHP Sean Manaea (0-1) will face the Texas Rangers on Monday in Oakland, opening a three-game series in which all six scheduled starters are lefties.

Rays: LHP Drew Smyly (1-4) will open a seven-game road trip Monday by facing the Toronto Blue Jays for the third time this season.