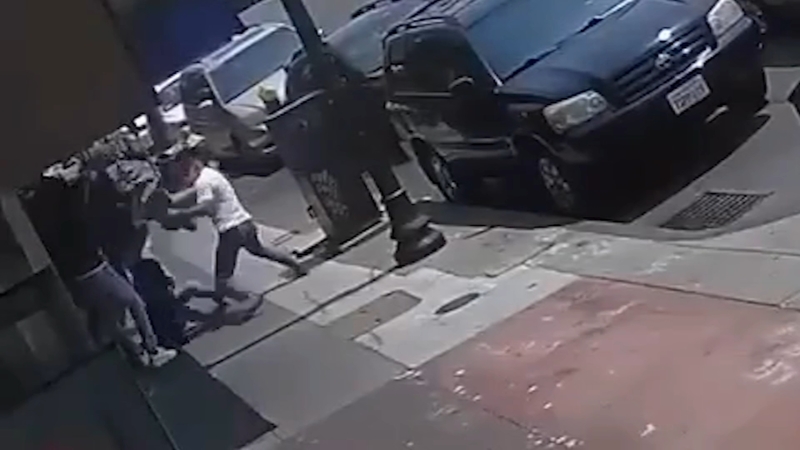 OAKLAND, Calif. (KGO) -- Two couples, targeted in a brazen daytime robbery in Oakland's Chinatown that turned into a shooting when a bystander intervened to help are thanking that Good Samaritan for his quick actions.

As seen in video being used in the police investigation, screams broke out along 8th and Franklin Saturday afternoon when armed men in ski masks targeted the two couples who were out for Boba.

“If he didn’t jump in I might not be alive.”

2 couples were at 8th & Franklin getting boba Sat when 2 men in ski masks grabbed purses belonging to 2 of the women.

A bystander who intervened was shot in the armpit & thigh. (1/3)#Oakland #StopAsianHate pic.twitter.com/zM08BIMKDS

"They pulled their shirts up and showed they have guns under their pants," says one man in the group who only wants to be identified as Mr. Chan for privacy.

The suspects grab the two women's handbags and Mr. Chan springs into action, grappling to get his girlfriend's purse back. He is pistol-whipped in the process.

A Good Samaritan who happened to be walking nearby sprang into action shortly after he heard the women screaming. You can see him fall to the ground as he is shot in the left armpit and right thigh. He tells ABC7 News that he is recovering in the hospital and hopes to be out by Monday evening.

While the suspects quickly sped off and have not yet been arrested, Mr. Chan and his friends, have this warning given recent attacks in Oakland's Chinatown.

"I don't regret what I did (but) I don't recommend if this happened to other people to get involved in that way you don't know who brought guns or if they have knives."