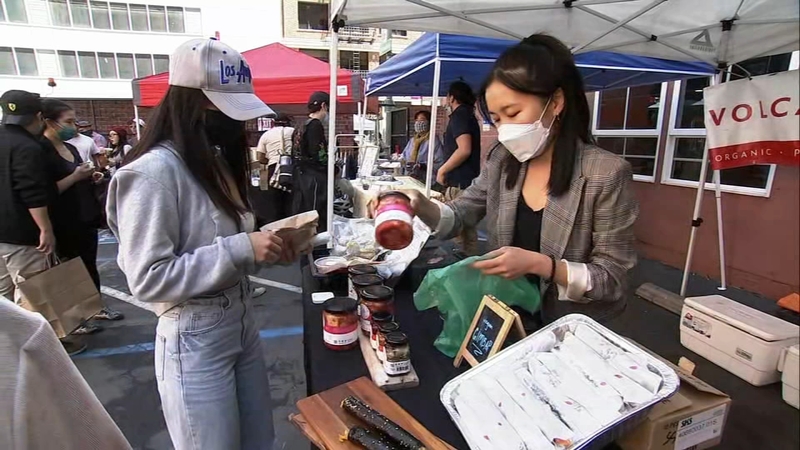 OAKLAND, Calif. (KGO) -- After yet another week of brazen and often violent attacks on seniors and residents of Oakland's Chinatown, there is a grassroots effort underway to make things at least a little bit safer for everyone.

In Oakland at the old Tribune Tower Saturday, there was a pop-up market and fundraiser to raise $75,000 to buy a surveillance system for a neighborhood now served by a hodge-podge of cameras installed by local business owners.

"I don't know what it is, but for some reason our elders are being attacked, said Joanna Au, who organized a GoFundMe to raise money for the security cameras. "Just for no reason, some are being robbed. It's a traumatic experience and I feel like they need to have some type of justice."

All of the vendors were local, many who serve the Chinatown community and they are small businesses that struggled to survive the pandemic.

The pop-up market fundraiser to buy security cameras is just the latest effort to make things safer for those who live and work in Oakland's Chinatown.

Chinatown leaders have organized volunteer safety patrols and residents have been outfitted with whistles and horns to send out an alert if they're being attacked or robbed.

And while many crimes are captured by existing cameras and cell phones, the hope is a more robust system will lead to more arrests or at least, better deterrence.

"Cameras are a good start, but having outreach to the community," said Chinatown resident Alan Feng, "especially to the folks who are committing the crimes, like having outreach in their environment and their neighborhoods, is probably more helpful than like specifically treating the system."

If you'd like to donate to the cause, check out the group's GoFundMe here.