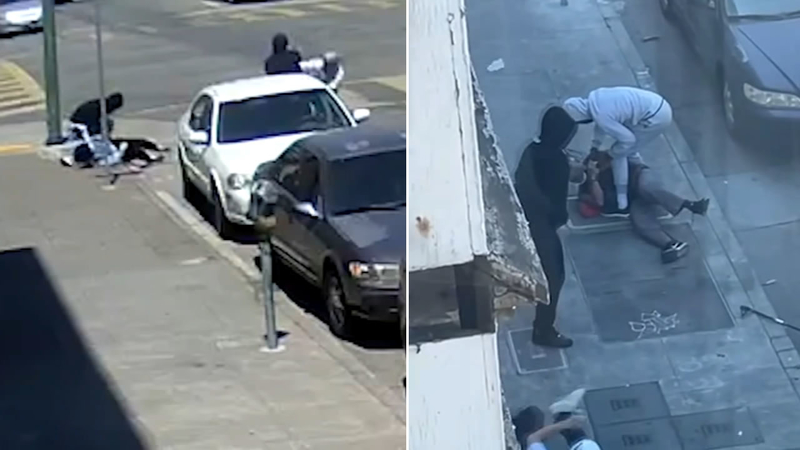 OAKLAND, Calif. (KGO) -- Oakland Police Department is investigating a robbery that happened Friday afternoon on the corner of 9th and Harrison streets, the same block where a man was robbed the day before.

Both incidents were caught on camera and share similarities, though police have not said if they think they are related.

In the incident on Friday, video shows two women walking down 9th Street when they are approached by two suspects wearing hoodies who had jumped out of an idled car. A third suspect runs over to join in, thrashing the women to the ground and taking their belongings, according to police.

Within 15 seconds, the suspects began running back to the car and sped off.

A similar incident happened on Thursday around 3:15 p.m. only 30 feet away.

Surveillance video shows two men wearing hoodies hop out of an idled car and approach an elderly man with a cane standing in front of the Chinese Independent Baptist Church. The two men tackle the victim to the ground and repeatedly hit him with a handgun.

The Oakland Police Department is investigating an armed robbery that occurred on July 15, 2021, at 3:15 PM. Click the link for more information. https://t.co/AG5Yo7m2l0#SAFEOAKLAND pic.twitter.com/36xpQlxw1d

One of the suspects was also seen pistol-whipping a bystander who walked over to see what was happening. The suspects managed to take some of the victim's belongings before running back to the car and getting away, according to police.

"Upset and quite angry," said Carl Chan, describing how he felt after learning of Friday's attack.

It's not just him. As president of the Oakland Chinatown Chamber of Commerce he said he has been getting flooded with calls from concerned community members.

"Saying how upset they feel and how angry they are and saying our community is being attacked," said Chan.

Violence against the AAPI community sparked protests in Oakland and across the country earlier this year, leading to the formation of volunteer community patrol groups and a promise from newly sworn-in Oakland Police Chief LeRonne Armstrong to boost resources.

"I know with the chief he has put more police presence in the area," said Mae Phu, one of the OPD community liaison officers stationed in Chinatown.

Chan said these efforts had started to reduce crime in the neighborhood, but he has recently noticed a trend in the other direction.

"Since last week we are seeing the spike of these crimes in Chinatown. It's concerning," said Chan.

The Chamber, in conjunction with Burma Superstar and the San Francisco Police Officer's Association are offering a reward of $2,500 for information leading to an arrest in each attack.

On Saturday, Magnolia Mini Mart will be hosting a pop-up market and fundraiser with more than 15 local vendors to raise money to install more surveillance cameras in the neighborhood. The event takes place from 12 p.m. to 5 p.m. at the Tribune Tower Lot 420 13th Street.