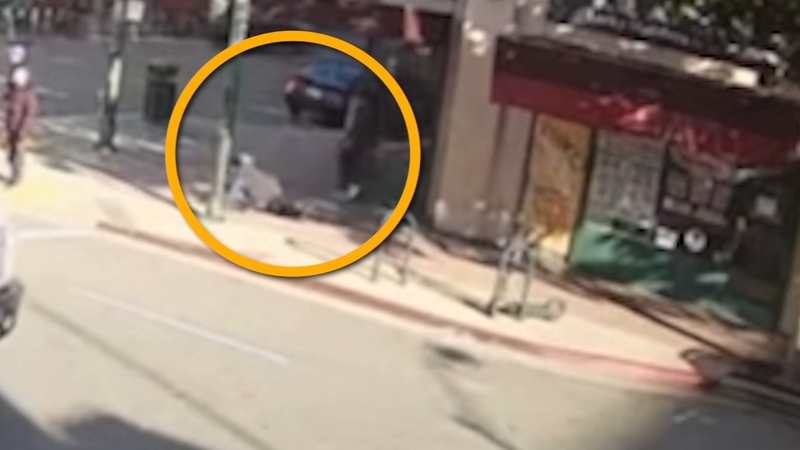 EXCLUSIVE: Woman shoved to ground in Oakland's Chinatown speaks out

OAKLAND, Calif. (KGO) -- We're hearing for the first time-from the senior seen on camera earlier this month-callously shoved to the ground in Oakland's Chinatown.

Videos from multiple angles used in the police investigation show a woman who only wanted to be identified as "Ms. Tse" get followed and shoved to the ground at 9th and Franklin.

66-year old Tse said in a statement she went to Chinatown to see her doctor and then to the bank to help a friend who is living in a nursing home.

"As I was getting ready to go home, I was pushed from behind. I fell but did not get hurt, I am okay, thank you for everyone's care!"

I found the 66-year old woman who was shoved to the ground in Oakland’s Chinatown.
⠀
The woman who only wants to be identified as “Ms. Tse” told me she went to Chinatown to go to the doctor, the bank & help a friend who lives in a nursing home.#StopAAPIHate #StopAsianHate pic.twitter.com/ycXzLN3NKJ

“As I was getting ready to go home I was pushed f/behind. I fell but did not get hurt. I am okay, thank you for everyone’s care.” she told me.
⠀
Sources tell me the man was arrested & Ms. Tse says that makes her feel a her community it “a bit safer”. #StopAsianHate #OaklandCA pic.twitter.com/NdQWepO4HH

This incident outraged many in the community to the point where a witness punched the suspect in the head.

The Oakland Chinatown Improvement Council helped to identify the victim. They're calling for different organizations in Chinatown to unite and work together during this time of AAPI hate.

Multiple sources tell me that suspect has been arrested. Tse says that makes her feel the community is a bit safer. She also reminds anyone who learns of her story to be careful, especially as people get ready and are out and about for Lunar New Year.