"The reason he died is he went upstairs to save his wife and daughter."
KGO
By Matt Boone 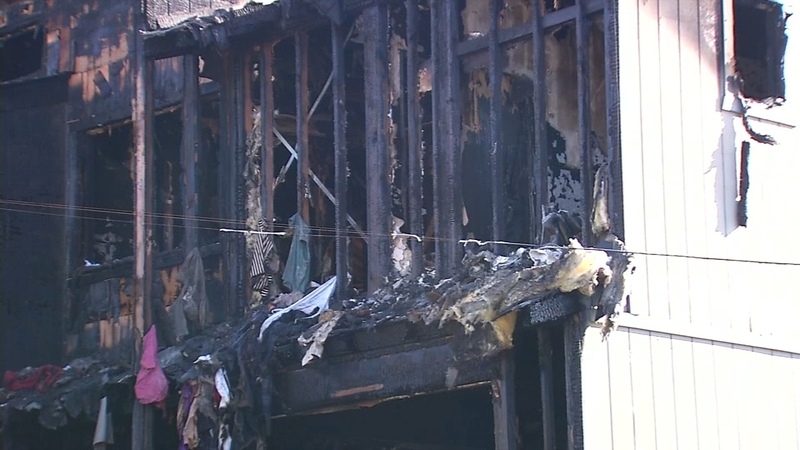 OAKLAND (KGO) -- A fast moving fire killed a 37-year-old man and his young daughter in their home Saturday morning, which police have deemed a double homicide.

Oakland Police Chief LeRonne Armstrong said he was called to the scene around 3a.m. after investigators realized it did not appear to be accidental.

The fire started around 12:15a.m. on the 9500 block of Stearns Avenue, across from Bishop O'Dowd High School.

Mohammed Al Samma lived there with his family. He said he had left for work as a security guard about an hour earlier when he got a call that the house was on fire.

Oakland Police Chief LeRonne L. Armstrong provides media the latest information on the investigation into the early morning double homicide of a suspicious fire that took the life of a father and his 1 year old daughter. Mother and other family member sustained burns & injuries pic.twitter.com/M31wu7NGIJ

When he arrived, he learned his cousin and cousin's daughter had died inside.

"The reason he died is he went upstairs to save his wife and daughter," said Al Samma.

The man's wife, who was pregnant, managed to get outside and was taken to the hospital with burns, according to Oakland Police.

However, the man and his daughter, who would have turned two this month, never made it out.

"The police said they were together," said Al Samma, making a hugging gesture.

Police have deemed the fire "suspicious" and are working with the Oakland Fire Department's Arson Investigation team as well as the Alameda county Arson Task Force and Alcohol, Tobacco and Firearms (ATF).

Al Samma said some of his family members were awake when it happened, breaking fast for Ramadan, and watched as a group of people threw Molotov cocktails at the home.

Police said they believe the fire was related to two other incidents earlier in the week.

On Saturday, April 10 a man was shot and killed at a liquor store on the 1900 block of 90th Street in Oakland.

Al Samma said that building is owned by his family, though he said they rent it out to the operator of the liquor store and were not involved in the shooting.

"The guys came after us with no reason," said Al Samma.

On Wednesday, the liquor store also caught on fire, which is being investigated as an arson as well.

The next day, police say a man involved in the shooting turned himself in and was arrested.

Police said they believe all three incidents may be related.

"The first homicide may have triggered other events, other violent event," said Armstrong.

Police are offering a $40,000 reward for information leading to an arrest in the fire that killed the father and daughter.