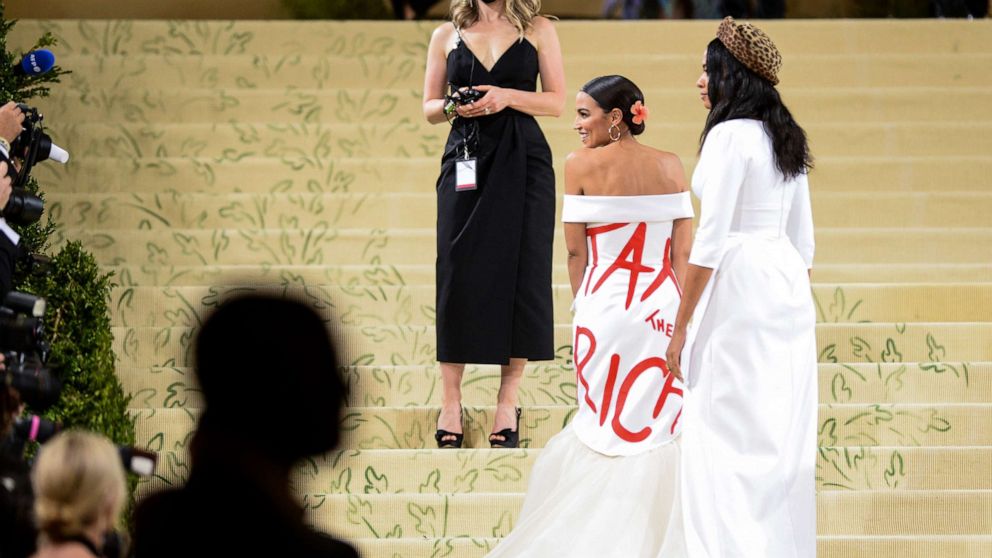 Rep. Alexandria Ocasio-Cortez, D-N.Y., had more to say Tuesday defending herself against backlash sparked by her controversial Met Gala gown emblazoned with the words "Tax the Rich," after saying Monday night she intended to carry the message into a wealthy space and borrowed the dress because "while the Met is known for its spectacle, we should have a conversation about it."

The New York congresswoman dominated talk about the gala on social media, with people calling her a hypocrite for wearing her economic justice message on the back of a fancy dress while attending a charity event attended by New York and Hollywood elites with tickets that cost $35,000 a pop.

Republicans on social media questioned why Ocasio-Cortez would attend an event for society's elite if she wants to tax the rich.

Sen. Rick Scott, R-Fla., said in a tweet Tuesday that Ocasio-Cortez "wants to tax the rich but took time out of her busy schedule to hob knob with NY and Hollywood elites who paid $30k to attend the #MetGala (and deduct it from their taxes)."

Florida's GOP Lt. Gov. Jeanette Nunez also took to Twitter Monday night saying, "Only in America where a self-described Democratic socialist can wear a $10k "tax the rich" dress, pay $30k for a ticket, and be praised as a champion for the poor. Champagne socialists like AOC are far removed from reality."

Ocasio-Cortez was quick to respond, explaining on social media that New York City elected officials are often invited to the gala and attend "due to our responsibilities in overseeing our city's cultural institutions that serve the public" -- pointing out that she was one of several of the city's politicians in attendance.

New York City's Democratic Mayor Bill de Blasio and Rep. Carolyn Maloney, D-N.Y., were also present at the annual event, which was canceled last year due to the coronavirus.

Ocasio-Cortez responded Tuesday on her Instagram story saying she thought about the criticism she would receive and that her body has been "policed from all corners politically" since she was elected to Congress.

"But we all had a conversation about Taxing the Rich in front of the very people who lobby against it," Ocasio-Cortez wrote on her Instagram story. "I am so used to doing the same exact thing that men do -- including popular male progressive elected officials -- and getting a completely different response."

Ocasio-Cortez also made note on her Instagram account that the dress was borrowed from designer Aurora James, who attended the gala along with the congresswoman.

James is the founder of Brother Vellies, a clothing brand focused on traditional African designs and sustainability, and the 15 Percent Pledge, a nonprofit that challenges major retailers to commit a minimum of 15% of their shelf space to Black-owned businesses, according to their respective websites.

In an interview during Vogue's livestream of the gala, Ocasio-Cortez and James explained the idea behind the controversial dress.

"We really started having a conversation about what it means to be working class women of color at the Met, and we said, 'We can't just play along, but we need to break the fourth wall and challenge some of the institutions,'" Ocasio-Cortez said. "And while the Met is known for its spectacle, we should have a conversation about it."

Ocasio-Cortez, on Instagram, said, "The time is now for childcare, healthcare, and climate action for all. Tax the Rich."

On CNN Tuesday morning, James reiterated that the concept behind the gown was to bring the message of economic justice to a gathering of the wealthy.

"The Met Gala is obviously one of the most exclusive events in the world, and we wanted to come and deliver a message. And I think when we talk about inclusion and gaining access to closed rooms for people of color, when you finally get a seat at the table you have to decide what the message is that you want to deliver," James said. "I think for the congresswoman, I think for myself, economic equality and economic justice is sort of top of mind."
Report a correction or typo
Related topics:
abc newsnational
Copyright © 2022 ABC News Internet Ventures.
TOP STORIES
Amy Schneider's historic 'Jeopardy!' run comes to an end
Police activity prompts lockdown in Hercules neighborhood
Newlyweds targeted in SF attempted robbery on their wedding day
Teen loses thousands on Zelle after getting offer to be a 'sugar baby'
Here's how you can win free tickets to NFC Championship game
Triple stabbing suspect killed in Hwy 85 crash, police say
'Jeopardy!' super champ Amy Schneider challenged to trivia on ABC7
Show More
San Bruno jewelry store owner confronts smash-and-grabbers
EXCLUSIVE: Mom reacts to murder charge in daughter's overdose
49ers prep for 3rd meeting against Rams this season
2 cases of omicron sub-variant BA.2 detected in Santa Clara Co.
NRA sues San Jose over gun liability law
More TOP STORIES News