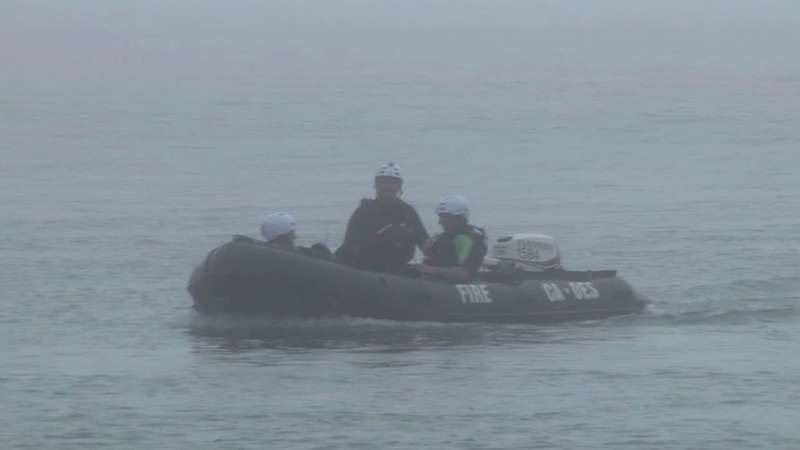 TOMALES BAY, Calif. (KGO) -- An hours-long search for a missing boater in Marin County waters stopped Monday evening, but rescue crews say they are not giving up hope just yet. Monday evening, the fog made the search very difficult, but they'll be back out again on Tuesday morning.

The man was last seen Monday morning off the waters of Tomales Bay. That's when a distress call went out that all three men on board the small fishing boat were in the water. One of those men is dead and the other survived the ordeal.

Search and rescue teams from Marin County returned to basecamp late Monday night after a difficult day of searching the rocky coastline of Tomales Point.

Ground crews had a lot of land to cover -- more than five miles of coastline on the Pt. Reyes National Seashore.

"We're just looking for any clues or evidence of somebody who remains missing from the boat," St. John said.

National park officials say three men were in the 20-foot Boston whaler, a fishing boat. Around 9 a.m. there was a distress call that the boat had capsized, tossing all men on board into the water.

The U.S. Coast Guard began searching Tomales Bay and recovered the body of one man. Another was rescued off Tomales Point and taken to a hospital, but the third man was never found. Three life-vests were located inside the wreckage of the boat, but what happened on board remains a mystery.

"We don't know did the boat run ashore, did it hit some kind of a rock or obstacle in the water, did it overturn?" said John Dell'Osso of the National Park Service.