4 displaced after sailboat sinks in Pacifica 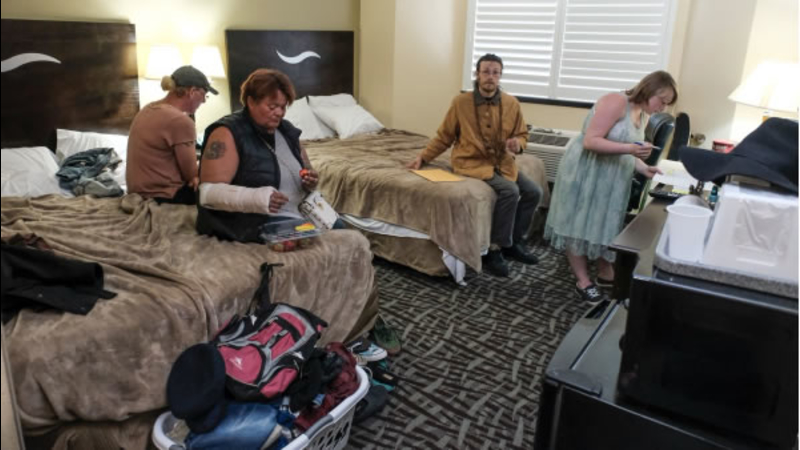 4 displaced after sailboat sinks in Pacifica

PACIFICA, Calif. (KGO) -- Four people who were traveling around the world are stuck living out of a motel for now after their sailboat sank in Pacifica.

"It wasn't a matter of running aground as much as being pushed aground," Tahnee Garver said, the co-owner and first mate of the 33-foot sailboat Hecate Spray, which came ashore last weekend and then sank Wednesday during efforts to tow it free.

On Thursday, ABC7 News found the mostly inexperienced crew of four stranded in a motel room, living off charity, with no money left and their investment on the bottom. "Everything is gone. No hope to rebuild her or get her back," Tahnee said.

Crews attempted to salvage a boat from a beach in Pacifica Wednesday after four people had to be hospitalized with minor injuries late Saturday night when it drifted onto shore.

She bought the boat with her friend from the trucking industry, Toni Claar, who set out on this trip with ambition. "I wanted to be the first trans female to circumnavigate the globe," she said.

The journey lasted two days. Perhaps: What remains of the boat, has now become a major hazard for surfers at Linda Mar Beach as tides expose and then hide the mast. "It's steel and harder than my head," surfer Peter PIrolli said.

RELATED: 4 hospitalized after boat drifts onto shore in Pacifica

"You could get stuck with a foot tangled or with metal or something. It's dangerous," Joseph Rizzo said.

Here is a GFM page link to the troubled crew. Their boat is on the bottom & they are out. https://t.co/13azTRuxnk #abc7now "This isn't us," said co-owner Tawnee Garver. They were going around the world until they almost hit the rocks. #Pacifica #abc7now "It's not us." Until now. pic.twitter.com/uRNxLfQtOO

Legally, Tony and Tahnee bear financial responsibility as owners, but they claim to have no money and the wreck fills with more sand every day.

And so, the saga of a sailboat named Hecate Spray. She left San Francisco Bay on a voyage around the world, but got only so far as Pacifica. For her crew, the opposite of a bon voyage.

The crew had begun a sailing trip around the world. Never made it past #Pacifica. Now they're essentially homeless, living on donations and help from #RedCross. pic.twitter.com/Kfhg3p6EFc

Boat is now beneath the waves and barely visible to surfers. Mast is a hazard. Not salvageable, according to the Coast Guard. #abc7now #pacifica pic.twitter.com/6RobbjByzQ

Surfers beware at Linda Mar beach in #pacifica where Officer Atticus Munro is warning them about a sunken sailboat offshore. It went down yesterday when towing efforts failed. Ran around Saturday. #abc7now pic.twitter.com/UhBldHixk0