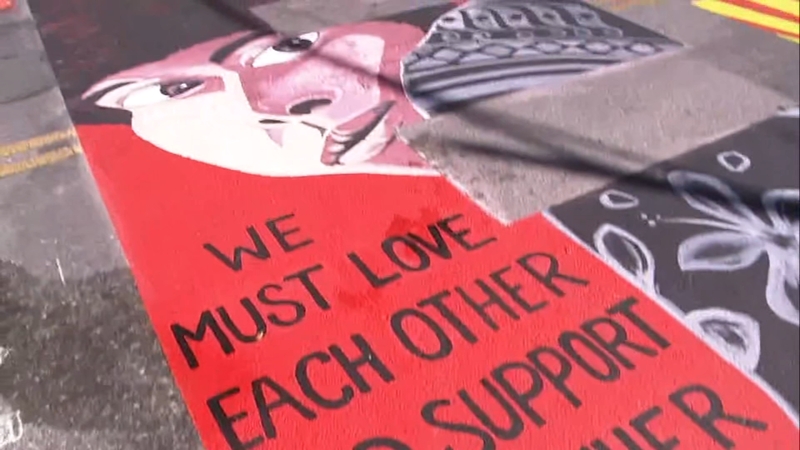 PALO ALTO, Calif. (KGO) -- Five Palo Alto police officers have filed a lawsuit against the city and its police department, claiming they've suffered discrimination and harassment because of their opposition to elements of a BLM mural that the city commissioned last year.

The case brings into focus the power of free speech and expression, and what should or shouldn't be protected from scrutiny.

In a civil complaint filed in Santa Clara County Superior Court, the officers claim they were "forced to physically pass and confront the mural" on Hamilton Avenue each time they entered the department. At issue were elements they consider to be offensive and discriminatory, including a portrait of Black Liberation Army member and FBI fugitive, Joanne Chesimard, also known as Assata Shakur, who was convicted of killing a police officer in 1973. She eventually escaped from prison and fled to Cuba.

The lawsuit also says the mural included the logo of the New Black Panthers, which is listed as a hate group by the Southern Poverty Law Center.

The law firm representing the officers told ABC7 News in a statement:

"It is important to note that the lawsuit, nor the plaintiffs, have any issue whatsoever with the mural at issue in general nor the BLM movement. The only issue was with two icons/pictures within one of the letters - the image of Assata Shakur and the image of the New Black Panthers - that the Police Officers association simply asked be removed from the mural on two occasions. They were told 'no.'"

The lawsuit alleges that the officers suffered harm after they voiced their objections to the city. The mural, which was meant to be a temporary installation, was eventually removed by officials in the fall.

"Even as a reporter, pastor, police officer, or doctor, lawyer, we will all face situations that challenge us and are extremely difficult," said Rev. Kaloma Smith, lead pastor at University AME Zion Church, who also serves as a local NAACP board member. "It's incumbent on our response not to overreact to input and stimulus that's around us, even if it's just temporary."

City officials say they have yet to be served with the lawsuit, and that the police officers who filed it are still employed by the city.