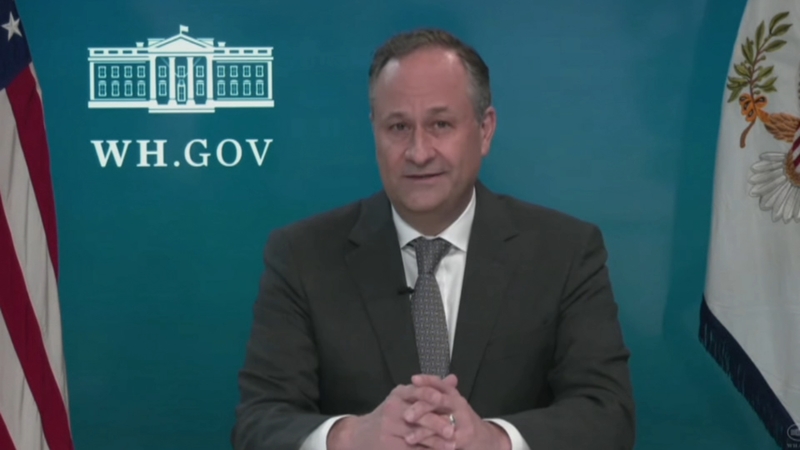 There are very few firsts at a Passover Seder, the traditional holiday meal Jewish people have celebrated for centuries. But for second gentleman Doug Emhoff, this Passover is very different than any he has celebrated in the past.

"Now this is a moment of many firsts," Emhoff declared, sitting solo in front of the White House logo, at a virtual Passover celebration at the White House on Thursday. It's a nod not only to his wife's historic role as the first woman, first Black and South Asian vice president. But also, his own, as the first Jewish spouse in the White House, leading its first Passover event live-streamed for the masses, days before the actual holiday.

"We are gathered today for the first Passover celebration of the Biden-Harris administration and I'm excited to join you as the first-ever second gentleman, married to the first woman to serve as vice president of the United States. And as the first Jewish spouse of a president or a vice president," Emhoff added.

White House officials say Emhoff respects the significance of his role as the first Jewish spouse of the first or second family.

"He obviously recognizes the significance of being the first in this space and I think he's very honored to have the opportunity to help lead some of these really important and significant traditions," a White House official told CNN.

Emhoff starred in multiple events during the election campaign aimed at reaching the Jewish community, often ruminating on his own Jewish upbringing. He said frequently that the ideals he learned through his faith were those President Joe Biden exemplified himself.

Thursday's event had at least 34,000 unique viewers on Zoom, with several thousand more watching on YouTube, an administration official said.

To all of his viewers, Emhoff said Passover has always been one of his favorite holidays, and he recalled going to Seders as a child at his grandmother's house in Brooklyn.

"Now, of course, it's exactly what you're picturing. That apartment. The plastic covering on the sofa. The smell of brisket wafting in from the kitchen. And me, sitting there at the table, patiently waiting, just waiting, to dig into that delightfully gelatinous gefilte fish, which inexplicably I still love today," Emhoff said. His parents, along with other members of his family, joined the virtual celebration on Thursday night.

The White House's Seder is a return to a tradition that dates back to then-Sen. Barack Obama's 2008 campaign. That year, a group of staffers on the Obama campaign staged a Seder in the basement of a Sheraton hotel in Harrisburg, Pennsylvania, a meal that became a precursor to an annual White House tradition.

One of the staffers who helped organize that Seder, Herbie Ziskend, now serves as deputy communications director to the vice president. Ziskend recalled that at the end of the 2008 Seder, when Jewish people traditionally say, "Next year in Jerusalem," Obama said, "Next year in the White House, if I win."

He, of course, did win, and the Obamas went on to hold Seders every year they were in the White House. However, once they left office, the official White House Seder went by the wayside.

In April 2017, the first year the Trumps were in the White House, there was a staff-level Seder held in the Eisenhower Executive Office Building, though President Donald Trump, his son-in-law Jared Kushner and daughter Ivanka Trump -- both of whom are observant Jews -- did not attend.

Last year, as the coronavirus pandemic was taking hold and much of the country was on lockdown, Kushner and Ivanka Trump traveled to the President's Bedminster, New Jersey, resort to celebrate Passover, a move that disregarded federal coronavirus guidelines.

Next year in Jerusalem -- and in person

Despite the continued increase in vaccines going into American arms, this year's Passover will still require a virtual gathering for many families, and the White House is no different.

Emhoff said that hosting a virtual celebration is something that can "keep us connected and remind us that we're not alone." But he also spoke about the light at the end of the tunnel.

"This is the second Passover in a row that we're celebrating virtually and hopefully it's the last. The pandemic has forced all of us to adjust or pause some of our favorite traditions and activities, but if we all continue to follow the guidelines that are helping to keep us safe ... we're gonna win this fight against Covid and we're all gonna be together in person next year," he said.

Officials declined to preview how the couple plans on celebrating the Seders over the weekend.

Vice President Kamala Harris, who joined Emhoff to close the event, said that she hopes next year people aren't just celebrating in Jerusalem, but also in person.

"Happy Passover, to all who celebrate, and indeed next year in Jerusalem -- next year, in person," she said.