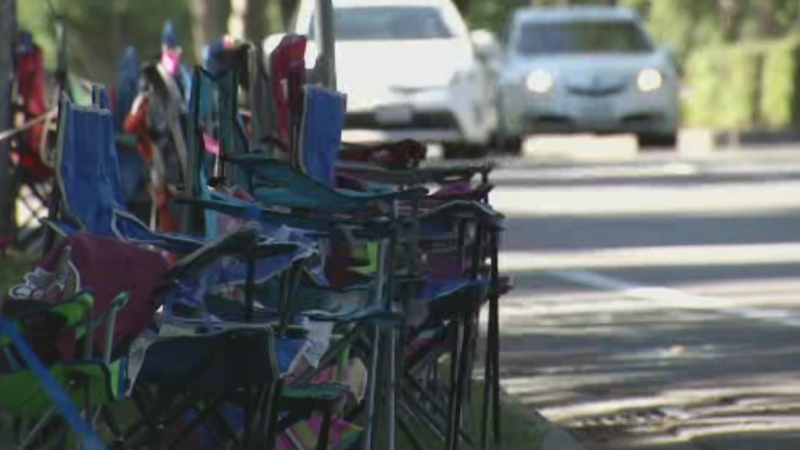 DANVILLE, Calif. (KGO) -- It's still hours before Danville's Fourth of July parade, but people are already in a mad dash to get a good seats!

It's usually something you see before a big Christmas sale. But diehard Danville Fourth of July parade fans say this is a tradition.

People park their garden chairs the side walk, even marking off their own little spaces on the sidewalk, just to make sure they get a good view of Monday's parade.

City workers began enforcing a rule prohibiting people from leaving their property unattended. But you can now leave your chair starting at 6 p.m. the night before the parade.

"I think it's just all-American, it's just awesome! I don't think you find this in very many places. The whole community comes together, regardless of who are," said Gloria Clayton, who is visiting from Arizona.

RELATED: Oakland cracking down on illegal fireworks with fines up to $10,000

"I usually have about four or five families come here. And I usually get here by 9 o'clock and stay till 6, that's about nine hours," said Ray Gambuzzi, a Danville resident.

Gambuzzi says he's been doing this for 40 years, but he noticed lots of people begin claiming their spots just a few years ago.

In Moraga, city officials are warning residents about another Fourth of July tradition. The annual fireworks display is launched from the Moraga country club. This year, the whole golf course will be closed to try and prevent residents from launching their own illegal fireworks.

The police issued a warning to residents, if illegal fireworks continue to be launched future city displays may be cancelled.

In recent years, the parade has drawn 40,000 to 50,000 attendees and has featured up to 150 entries, including bands and floats, marching down Hartz Avenue in Danville making it the largest single event in the Bay Area.