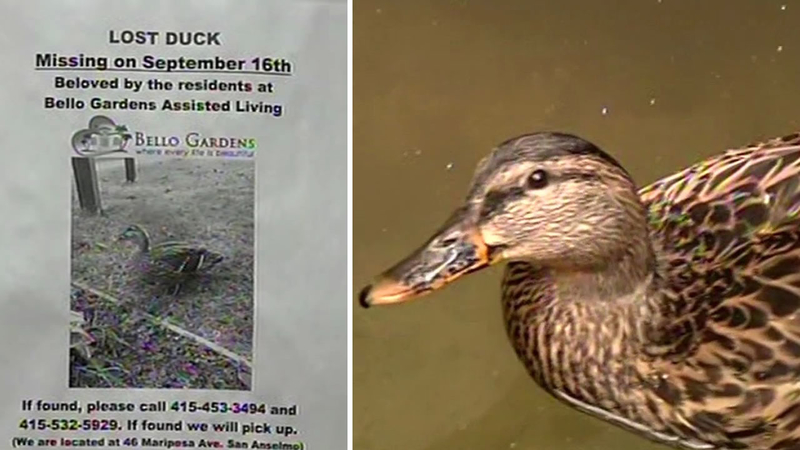 The sign out front of the Bello Gardens Assisted Living facility in San Anselmo says residents had a pet duck, then lost it and though it has been found, it will not be coming home.

"I don't know why we can't have her back. Not going to happen, is it?" said LaRita Clark a resident of Bello Gardens.

"She is used to this place. She is just a pet to everybody. We all love her," said Norma Manning, a resident.

Juanita arrived at Bello Gardens as a four day old duckling, rescued from the street by a passing gardener, who gave it to Walter Peredes, the cook.

#missingduck Well, it was. But not anymore. Not that they will get Juanita, as they named it, back. pic.twitter.com/koL6Frt9eE

Peredes nursed Juanita back to health and built a cage for her. Two weeks ago, Juanita flew away, only to be rescued by WildCare in San Rafael where she must now remain because, as director Melanie Piazza explains, Juanita is technically wild animal protected by the Migratory Bird Treaty Act.

"Hopefully, people will not hate and demonize us over something we have no control over. It's the law. We are not allowed to give her back," Piazza said.

"It's a gray area, but so many things in life are," Hinton said.

Including the mood of residents at Bello Gardens, gray and gloomy over the loss of the colorful mallard that brightened their lives.

#missingduck When you reach your 90’s, it’s inevitable that this world gets more simple and yet more complicated pic.twitter.com/KCMJMQNmdh

#missingduck They raised Juanita from four days old. She became a pet. Loved the residents and they, her. pic.twitter.com/PpUCk3yyCI

#missingduck Two weeks ago, she did what most residents here cannot. She left. A short flight. A last one. pic.twitter.com/KQpV8ckhNO

#missingduck The duck was rescued by Wildcare in San Rafael, and they discovered that she is wild and protected. pic.twitter.com/LOMMY7GppV

#missingduck She will never go home. The backyard at Bello Gardens seems so empty to residents. pic.twitter.com/ScLCtI9V3d

#missingduck Complicated, isn’t it? “They have already lost so much,” said the executive director. pic.twitter.com/WNdcE9jb23

#missingduck It is very quiet around here without the quacking. pic.twitter.com/IoE5llEgBE