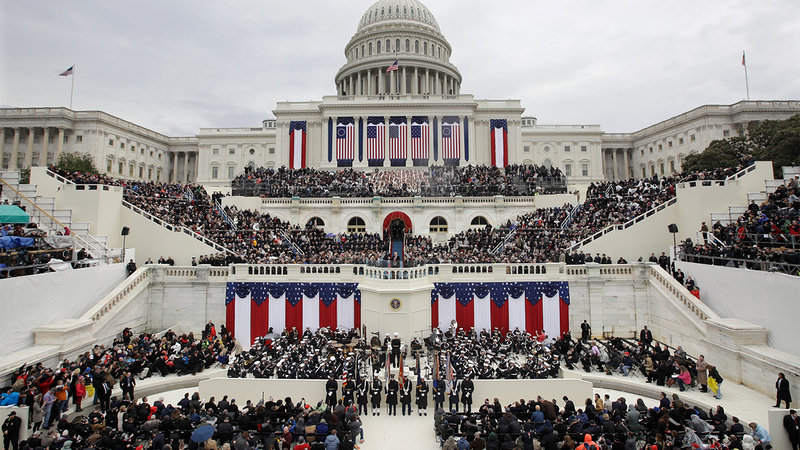 Presidential oath of office: Here's what it says

WASHINGTON -- Every president of the United States has recited the oath of office as the official start of their presidency.

The oath is found in Article II of the Constitution. It contains 35 words and goes as follows:

Joe Biden being sworn in as the 46th president of the United States.

According to ABC News, George Washington reportedly added the words "so help me God" to the oath, and it has been since included by every president except Theodore Roosevelt.

All but two presidents placed their hand on a Bible while saying the oath, according to the Joint Congressional Committee on Inaugural Ceremonies. John Quincy Adams took the oath upon a book of the law. Theodore Roosevelt did not use a Bible for his first inauguration.

In 2013, President Barack Obama took the oath using two Bibles, one owned by Abraham Lincoln and the other by Martin Luther King Jr.

The vice president-elect takes a slightly different, longer oath, which is also utilized for members of Congress and some other federal employees:

"I do solemnly swear (or affirm) that I will support and defend the Constitution of the United States against all enemies, foreign and domestic; that I will bear true faith and allegiance to the same; that I take this obligation freely, without any mental reservation or purpose of evasion; and that I will well and faithfully discharge the duties of the office on which I am about to enter: So help me God."
Report a correction or typo
Related topics:
politicspresidential inaugurationhistorygovernmentus capitolu.s. & world
Copyright © 2022 KGO-TV. All Rights Reserved.
RELATED
How White House staff preps residence for incoming president
PRESIDENTIAL INAUGURATION
Year-in-review: The biggest stories of 2021
'Nailed it:' 4-year-olds recreated Obama Inauguration outfits
Poet Amanda Gorman says she was tailed by guard who thought of her as 'threat'
Michelle Obama speaks to 'GMA' in first post-inauguration interview
TOP STORIES
At-home COVID-19 test request website goes live 1 day early
FedEx driver perfectly launches package at front door of SF home
Doctors weigh in on what future of living with COVID looks like
Here's how you can get free home COVID tests
New date, venue announced for Grammy Awards
Sickout planned in Oakland as students go back in Hayward
Calif. students to get subsidies for volunteering
Show More
Report: Amy Schneider would consider hosting 'Jeopardy!'
Bay Area native killed after man pushes her in front of NY train
Minneapolis men's knitting group continues to grow
Local Native Americans oppose replica mission bell installation
Bay Area families fear for relatives in Tonga after tsunami
More TOP STORIES News