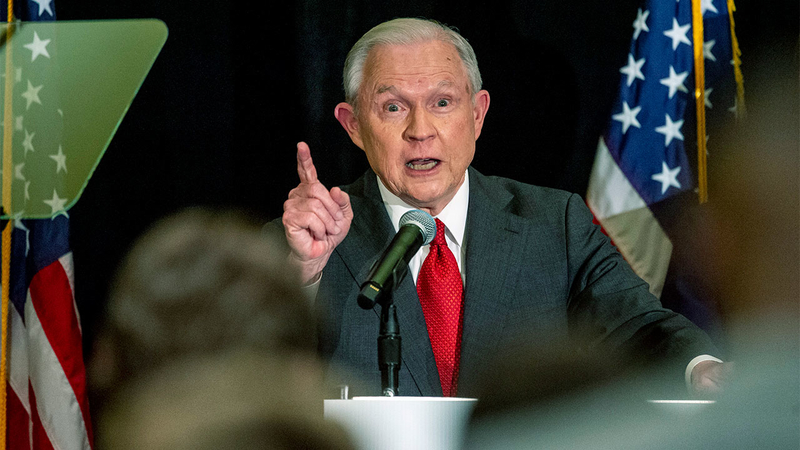 WASHINGTON -- Jeff Sessions, who was forced out as President Donald Trump's first attorney general, fell short of winning the GOP nomination for the Senate seat he held for 20 years and now advances to a runoff with former college football coach Tommy Tuberville.

Leading the crowded Republican primary, Sessions and Tuberville ended Tuesday in a tight race. The winner of their March 31 runoff will face incumbent Democratic Sen. Doug Jones, as Republicans try to reclaim the Senate seat in the once reliably red state.

Sessions gave up the Senate seat when he was appointed Trump's attorney general, a position he was forced to resign after his recusal from the Russia inquiry sparked blistering criticism from the president.

Sessions, 73, has maintained loyalty to Trump, noting that he was the first U.S senator to endorse Trump in 2016 and arguing he would be most effective in advancing Trump's agenda.

"Anyone can say they are for the Trump agenda, but talk is cheap, but I have fought on the great issues of our day and won," Sessions told a cheering crowd in his hometown in Mobile.

"We have this opportunity to turn the Trump agenda into reality, and I am the man for that job," Sessions said.

Tuberville, boosted by name recognition from years as a football coach at Auburn University, positioned himself as a political outsider and tried to capitalize on Trump's past criticisms of Sessions.

"Only one candidate in this race will support Donald Trump down the line. Doug won't. Jeff didn't. But Tommy will," Tuberville, 65, told a cheering crowd at his election night watch party.

Byrne, a three-term congressman from south Alabama, gave up a secure House seat to run for the Senate but ended up in third place.

The winner will likely be a strong challenger to Jones, who defeated a scandal-plagued Moore in December 2017 to become Alabama's first Democratic senator in a quarter-century. Jones is the only Democrat in a statewide office in the GOP-controlled state.

Moore ran a subdued race in his latest Senate bid, coming in fourth.

The primary had been a slug fest and Sessions and Tuberville showed no signs of letting up as the race headed to political overtime.

Tuberville said he would finish the job that Trump began when he looked at Jeff Sessions across the table and said, "ou're fired."

Sessions referred to Tuberville, who until last year was registered to vote in Florida, as a "tourist from Florida." The former senator asked where Tuberville was when he was supporting and helping Trump get elected.

"Where was he when Donald Trump needed him?" Sessions said.

Voters expressed a mix of admiration for Sessions and a desire to move on.

"He is one of the most honest people I've ever known ... and loves the state of Alabama," said Beth Yoder, a 76-year-old retired nurse.

In the Birmingham suburb of Homewood, home builder and Trump supporter Chris Youngs said he voted for Tuberville for U.S. Senate because he didn't like the way Sessions stepped aside as attorney general from the investigation into Russian involvement in the 2016 election.

"Jeff Sessions had his shot. You know, I frankly feel he embarrassed the state when he was attorney general and I didn't want to see him in office again," said Youngs, 55.