The Earthquake Effect: Here's what cities are doing to keep you safe 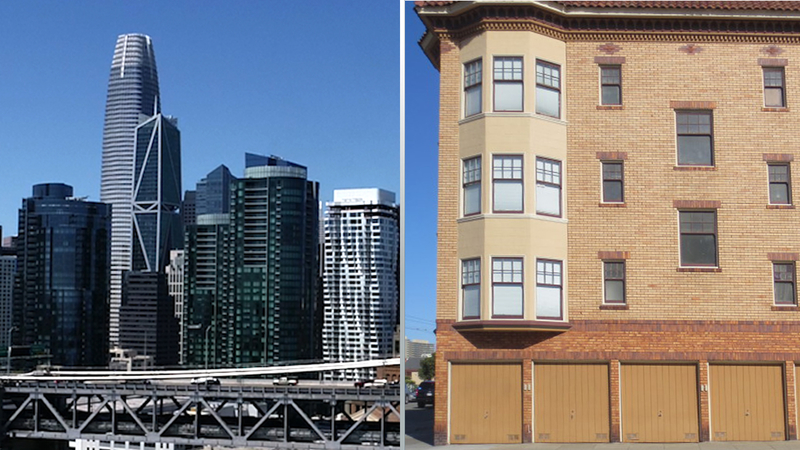 Skyscrapers vs. Houses: Which will fall during a quake in the Bay Area?

SAN FRANCISCO (KGO) -- On a clear, warm September day, up on the 62nd floor of Salesforce Tower, which is the highest you can go in an elevator from the ground floor of the building, the 360 degree view of San Francisco is stunning. It is the tallest office building west of the Mississippi, and the man who led the team that built it is remarkably chipper from his overnight flight back from the Middle East where he was consulting on another skyscraper.

"If you think about it, a lot of these buildings that we are looking at are 300 feet tall," says Ron Klemencic, chairman and CEO of Magnusson Klemencic Associates, as he points down to some of the buildings below. That is the same size as the piling beneath the Salesforce Tower securing it to the ground.

He adds, "Sitting on top of the deep piling is a very, very thick, almost 15 feet thick, concrete mat, on which the entire building sits, and then springing up from that as a very, very strong, almost 90 feet square, concrete core that goes from the base of the building all the way to the roof."

This is what makes the tower so unique around the world - especially in a region awaiting a large earthquake.

Many experts agree with him. When that earthquake hits the Bay Area as predicted, the worst thing that could happen is that the elevators might automatically shut off in Salesforce Tower because it was built stronger than the current building code says it needs to be.

"For the past 30 years or so we've had excellent building codes and excellent practices and design and construction of buildings," says one of the nation's leading structural engineers, Ron Hamburger, of the engineering firm Simpson Gumpertz and Heger.

"So our newer buildings should perform quite well. Meaning we would expect them to protect the life safety of the people inside them," he adds.

So what does that mean for the buildings built over 30 years ago?

For that question, Hamburger is more sober.

"San Francisco has several hundred high rise buildings that have been constructed starting in the year around the 1920s or so," he said. "In fact, there are even a few that predate the 1906 earthquake. And I wouldn't be surprised at all if, in a repeat of an earthquake of that size, we had a few of those buildings collapse."

That earthquake predated the Richter scale but is generally accepted by seismologists as a 7.9 quake.

San Francisco is struggling to come up with a solution to the residential and office buildings Hamburger is referring to which also include, "around 40 steel-frame high rises clustered in downtown San Francisco and built between 1960 and 1994," according to a June 2018 report from the New York Times.

Michael Germeraad, of the Association of Bay Area Governments, says a lot of these buildings require individual analysis.

"Generally these retrofits are unique to the conditions of the building and require a detailed engineering evaluation to understand the risk," he said. "And if shown to be at risk, require a unique, building specific, retrofit strategy."

However, solutions to make smaller buildings safer is being employed across the region.

After the 1989 Loma Prieta earthquake, which measured 6.9 on the Richter scale, several of the residential buildings in San Francisco's Marina neighborhood "pancaked" or fell onto the bottom floor.

As Disaster Recovery Expert Mary Comerio explains, these buildings became a standard in the Bay Area beginning in the 1960's to save on street parking.

"It's built of wood, typically, and the ground floor has really big openings either for parking," she said. "Very typical of three stories of all that wood frame housing is kind of heavy to be sitting on those old lollipops that are holding the building up. And then, nothing to hold up that apartment building above it."

As a result of Loma Prieta, five Bay Area cities including San Francisco, Berkeley, Oakland, Alameda and Fremont passed legislation requiring soft story retrofitting which entails add steel frame to shore up the base of the buildings.

"So putting in an element like this, a steel frame, which has the strength that you need but still has that open space, has been a really popular choice for building owners and strengthening their buildings," said Annie Kao of Simpson Strong-Tie. A Northern California-based company that makes retrofitting components.

RELATED: The catastrophic fall and slow rise of the Bay Bridge after Loma Prieta

Retrofit costs can range from $40,000 to $200,000. Owners can pass on some of that cost to renters and get some reimbursements from the city and state.

These measures, say experts can go a long way in ensuring a measure of safety. But Comerio is realistic.

"I think it's this misunderstood public misunderstanding that, oh if it's to code, it's fine," she said. "It just means it's safe enough to get out of it."