Pope Francis vs. Donald Trump: 'Not Christian' to only build border walls 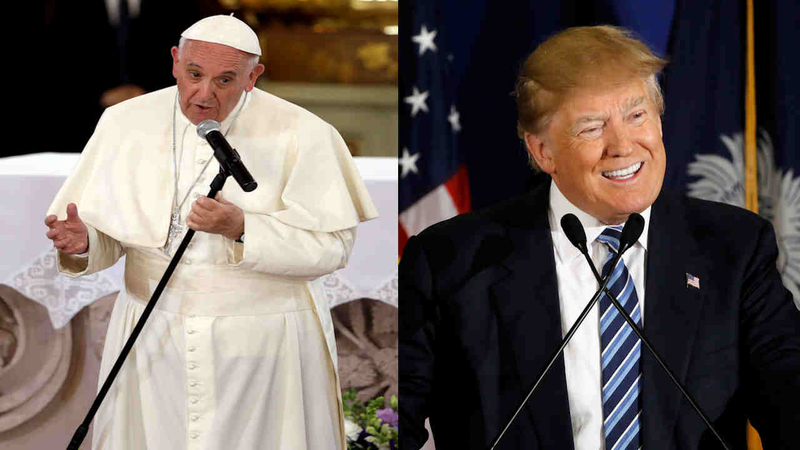 Pope vs. Trump: 'Not Christian' to only build border walls

ABOARD THE PAPAL PLANE -- Thrusting himself into the heated American presidential campaign, Pope Francis declared Thursday that a person is "not Christian" if they want to address illegal immigration only by building a wall along the U.S.-Mexico border. Trump fired back ferociously, saying it was "disgraceful" for a religious leader to question a person's faith.

Trump, a leading U.S. Republican presidential candidate, has said that if elected, he will build a wall along the Mexican border from Texas to California and expel 11 million people who are in the country illegally. The Pope's comments en route home from Mexico came hours after he prayed at the Mexican border for people who died trying to reach the United States.

Asked what he thought of Trump's pledge, Francis said: "A person who thinks only about building walls, wherever they may be, and not building bridges, is not Christian. This is not in the gospel."

Not having heard Trump's border plans independently, Francis said he'd "give the benefit of the doubt." But he added: "I say only that this man is not Christian if he has said things like that."

Trump, a Presbyterian, shot back within minutes.

"For a religious leader to question a person's faith is disgraceful," he said at a campaign stop in South Carolina, which holds a key primary on Saturday. "I am proud to be a Christian and as president I will not allow Christianity to be consistently attacked and weakened."

He also said the Mexican government has disparaged him to the Pope and separately invoked the Islamic State group, saying that if it attacks the Vatican, "I can promise you that the Pope would have only wished and prayed that Donald Trump would have been president because this would not have happened."

Trump last week said Francis' plans to pray at the border showed he is a political figure being exploited by the Mexican government.

Donald Trump responds to Pope Francis' comments that anyone who wants a border wall is not Christian.

Asked if he felt he was being used as a pawn of Mexico, Francis said he didn't know.

"I'll leave that up to your judgment and that of the people," he said.

He seemed quite pleased to hear that Trump had called him a "political" figure, noting that Aristotle had described the human being as a "political animal."

Here is the full question and answer aboard the papal plane:

Q: Good evening Your Holiness. Today you spoke eloquently about the problems of migrants. On the other side of the frontier there's a very tough electoral campaign going on. One of the Republican candidates for the White House, Donald Trump, in a recent interview, said you are a "political man" and that maybe you are a pawn of the Mexican government as far as immigration policy is concerned. He has said that if elected, he would build a 2,500-kilometer long wall along the border. He wants to deport 11 million illegal immigrants, thus separating families, etc. I would like to ask you first off what do you think of these accusations against you, and if an American Catholic can vote for someone like this.

A: Thank God he said I was a politician because Aristotle defined the human person as "animal politicus." So at least I am a human person. As to whether I am a pawn, well, maybe, I don't know. I'll leave that up to your judgment and that of the people. And then, a person who thinks only about building walls, wherever they may be, and not building bridges, is not Christian. This is not in the gospel. As far as what you said about whether I would advise to vote or not to vote, I am not going to get involved in that. I say only that this man is not Christian if he has said things like that. We must see if he said things in that way and in this I give the benefit of the doubt.

Trump goes after Pence, McConnell in speech to party donors