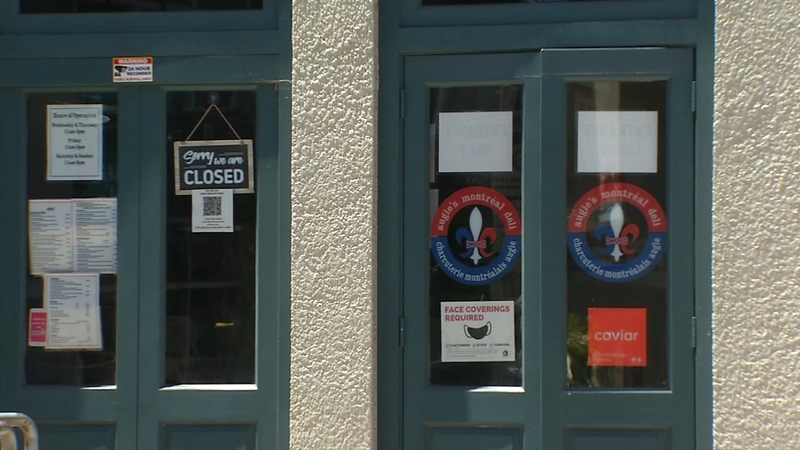 Why some Bay Area are businesses closing as CA nears reopening

SAN FRANCISCO (KGO) -- As California prepares to reopen the economy on June 15, business owners are having a hard time hiring staff.

A supply chain issue plus waiting for people to finally feel comfortable eating indoors, are some of the factors contributing to Lex Gopnik-Lewinski's, decision. By the end of this week he is closing Augie's Montreal Deli for possibly 4-5 months.

The CDC says fully vaccinated people don't need to wear masks in most settings anymore, but California still has a mask mandate. Dr. Mark Ghaly explains why, and what might change come June 15.

"So, we have something to reopen with. If we were to keep going with the way that we are going right now. Even though business is slightly up the cost is kind of negating all that and we would burn through all of the money we have if we were to stay open over the next couple months," said Gopnik-Lewinski.

Economist Enrique Lopezlira with UC Berkeley's Center for Labor Research says there's another aspect setting back the economy. There is a staffing shortage nationwide impacting several industries at once.

"Schools are not fully reopen so a lot of workers cannot come back to the workforce because they have no childcare available for them," said Enrique Lopezlira, Ph.D., Director, Low-Wage Work Program UC Berkeley Center for Labor Research and Education.

Lopezlira says better benefits and incentives will lure back staff.

"Yes, they have to raise the wages because they were paying too low before but they also have to provide the kind of jobs that workers want. Stable scheduling, paid leave for sick or vacation leave be able to meet basic living expenses with their work," said Lopezlira.

Laurie Thomas, Executive Director of the Golden Gate Restaurant Association and owner of two restaurants in San Francisco is offering financial incentives to get her staff back.

"We took a look at the end of April and we raised our hourly rates particularly for the kitchen and we looked across all of our salary work force and we raised the rates and we bumped up the quarterly bonus. Of course we have been losing money for a year and a half," said Thomas.

Another factor contributing to the staffing shortage locally is people leaving the area. According to Thomas 15% of San Francisco's restaurant staff moved out of the state. That's directly impacting the number of hours and day's restaurant can open.

Luz Pena: "Are the EDD checks also a factor contributing to the staffing shortage?"

Laurie Thomas: "I do think it's a factor, but I don't want to say it's the only factor which is the extended unemployment benefits are giving people a bit of a cushion to say they either don't feel safe coming back to work yet or more importantly in the Bay Area their kids are not in school."