Richmond tenant fights back against mold in his apartment 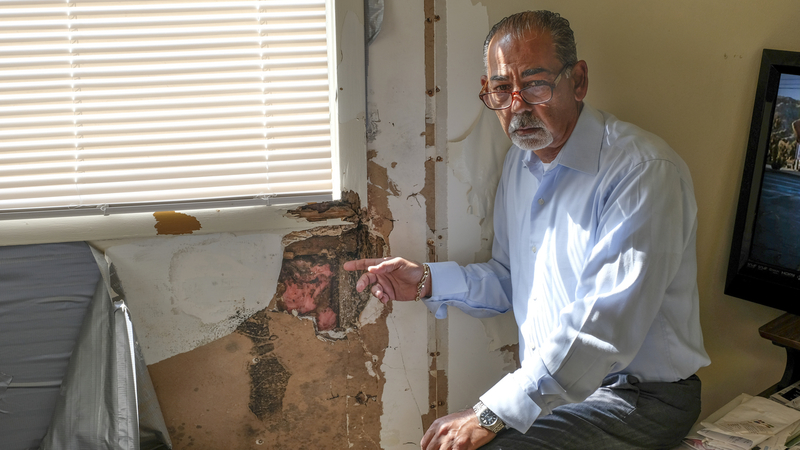 RICHMOND, Calif. (KGO) -- Would you rip open the walls of your apartment?

Jerry Miller of Richmond did, to make a point.

Finally, he was getting attention to a problem he has battled over with his landlord for three years. Most of us would call it an apartment from hell.

"You get watery eyes. Middle of the night is hard breathing. You feel like you're having a heart attack," Miller said.

It's worse for his mother, Barbara.

"I am shaking. It's in the nose, eyes, everywhere. Breathe in. Breathe out," she said.

We met up with Miller on Friday when the City of Richmond's building department promised a meeting at the apartment with his landlord, Castle Management. Then, a change of plans.

They moved that meeting to City Hall, hoping to avoid the presence of our news crew.

Ultimately, they met behind closed doors.

Meantime, more tenants confirmed problems in the other units.

"The mold is a problem, a big problem," said Alanna Wise. "It is frustrating because we're helpless and don't have other options."

While we visited, David Faria, an independent inspector from Blue Water Environmental looked around. He rates the mold problem as a solid eight out of 10.

"How much damage is there?," we asked.

Back in that meeting at City Hall, the building department exercised its leverage. After half an hour, Jerry Miller emerged with a promise for the fixes in his unit and attention to the others.

Castle Management will put him and his family in a hotel during the process.

We asked Joe Lawton of Castle Management why this resolution took so long.

"We have no issues," he said. "We have not delayed. Or gone slowly at all."

And so the promised resolution of a landlord-tenant dispute. Just like Einstein's theory, "time is relative."