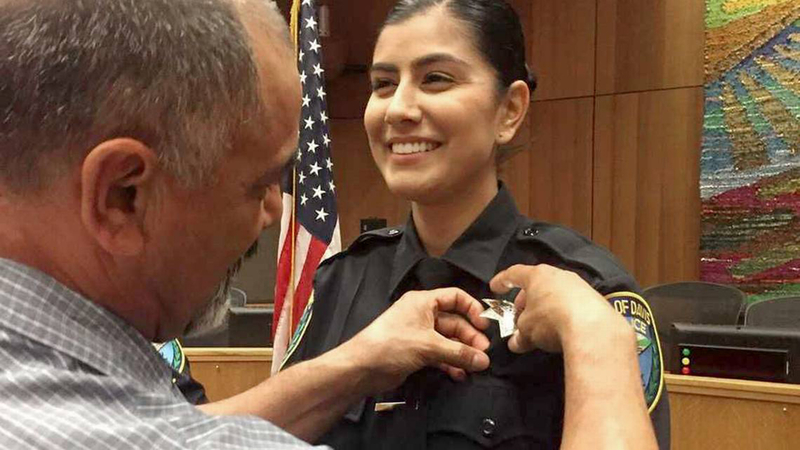 DAVIS, Calif. -- Natalie Corona was a rising star in her police department with a sparkling smile and a huge heart who had followed in her father's footsteps and became a police officer, fulfilling a lifelong dream just a few months ago when her dad pinned the badge on her uniform.

On Friday, her father and a stunned community mourned the 22-year-old who was shot and killed on duty while responding to a multi-vehicle crash in the small college town of Davis, California.

"She's the cop that any community would want," said Lt. Paul Doroshov, a spokesman for the Davis Police Department. "Everybody who met her liked her."

The shooter opened fire as Corona was investigating a three-car crash in the city west of Sacramento, a college town that is home to the University of California, Davis where there has not been a fatal police shooting in nearly 60 years.

The Davis Police Department provides an update on the shooting that took the life of an officer.

The suspect, who has not been identified, was later found dead inside a home with a self-inflicted gunshot wound following a short standoff with officers, the Davis Police Department said Friday.

Police have not determined what prompted the attack, which occurred in a residential neighborhood up the street from a park that hosts a weekend farmer's market. Residents placed flowers at a growing memorial outside the police department Friday, where flags flew at half-staff.

Corona's colleagues, family and friends mourned a vibrant life that was cut short.


"She was the best of us," said Davis officer Mike Yu, after placing a "Blue Lives Matter" flag at the crime scene, about a mile from the police station.

As the eldest of four daughters, Corona grew up dreaming of becoming a law enforcement officer like her father, said her cousin, Emily Gomez, 26.

"I don't remember her talking about anything else than wanting to become an officer," said Gomez, who said her cousin was an athletic star in high school, excelling in volleyball, basketball and track. She grew up in a tight-knit family in the Northern California town of Arbuckle. The family had emigrated from Mexico a few generations ago and had become established members of their community.

Corona's father, Jose Merced Corona, spent 26 years as a Colusa County Sheriff's sergeant before retiring and getting elected to the county's Board of Supervisors last November. Her mother is a first-grade teacher, and two cousins are also in law enforcement, Gomez said.

Corona graduated from the Sacramento Police Academy last July and completed her training in December just before Christmas, officials said.

"She was very proud," her father told Fox40-TV, choking back tears as he spoke about how much she loved her job.

"She would come home, she would be beaming," her father said, his voice quivering. "She died doing what she wanted to do, what she loved."

Father and daughter smiled with pride in a photograph from Corona's swearing-in ceremony at the Davis Police Department in August. The photograph published by the Williams Pioneer Review shows her father pinning on her badge as Corona stands with arms at her side and a big smile.

Police did not release any details about the shooting on Friday and have not said if the suspect was involved in the three-car collision that Corona responded to.

One of the drivers in the crash, Christian Pascual, 25, said the shooter appeared to have been a bystander who fired from behind him.

Pascaul told The Sacramento Bee he got out of his car to exchange information with the other drivers involved in the collision when Corona arrived.

"I gave her my license, and she was just about to give it to me," Pascual said. "That's when I heard the shots."

He said he ducked and when he looked up Corona was on the ground and the shooter was "shooting at what looked like random people to me."

Another witness, Shaun Kingston, said he heard at least 10 gunshots.

From his vantage point, across the street, Kingston said he saw the gunman shoot at a firetruck and reload expertly.

"I just watched him basically shoot at the firetruck, dump a clip and put another one in, then just start walking down (the) street like it wasn't nothing," Kingston told The Associated Press.

Kingston said he didn't see that an officer had been shot. He said as terrified bystanders ran, he saw the shooter calmly walk away before he lost sight of him in the crowd.

In an emotional news conference late Thursday, Davis Police Chief Darren Pytel called Corona "a rising star in the department" who was "full of life and energy and just an absolute pleasure to be around."

"She had such a big heart," Nicole said. "All she wanted to do was help people."

In December, the Davis Police department posted a picture of Corona on its Facebook page showing her bringing Christmas gifts to a family who lost their home in the deadly fire that had destroyed the town of Paradise weeks earlier. She carried a Santa Claus-like sack that said "Happy Holidays" over her shoulder.

Corona's own Facebook page includes a glamorous picture of herself in a royal blue gown, holding a "Blue Lives Matter" flag, with a tribute that now rings eerily.

"I would like this photograph to serve as my gratitude for all those law enforcement men and women who have served, who are currently serving, and those who have died in the line of duty protecting our liberties in this great country," Corona wrote in the October 2016 post.

Davis police spokesman Doroshov said the agency hasn't lost an officer in the line of duty since 1959, when officer Douglas Cantrill was killed.

Corona is the second officer killed in California in the past two and a half weeks.

Cpl. Ronil Singh, 33, of the Newman Police Department was shot to death Dec. 26 after he stopped a suspected drunk driver.

Gustavo Arriaga Perez, also 33, was charged with the murder. Authorities said Perez Arriaga was in the country illegally and was preparing to flee to Mexico when he was arrested. That killing rekindled a debate over California's sanctuary law that limits cooperation by local officials with federal immigration authorities.