The FAA is putting pressure on the City of San Jose to take action and clear the area.
KGO
By Amanda del Castillo 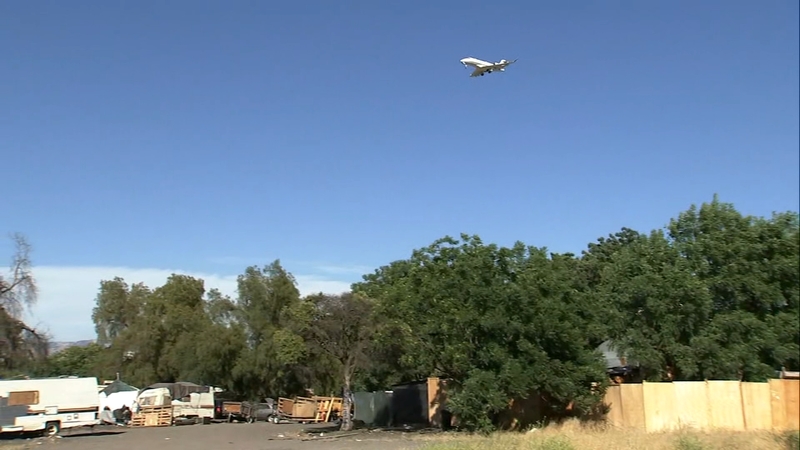 SAN JOSE, Calif. (KGO) -- Hundreds of unhoused people have either found or built shelter on a 40-acre parcel of land near the Mineta San Jose International Airport (SJC).

The specific location has the FAA concerned. According to the administration, the property in question is owned by SJC.

It is located between West Hedding Street, Coleman Ave, Asbury Street and the Guadeloupe River Park.

The FAA is putting pressure on the City of San Jose to take action and clear the area.

ABC7 News was on-site as several planes approached SJC. The noise of landing aircraft took over what is supposed to be a buffer property at SJC.

However, the buffer property is currently being used as a homeless encampment. According to the FAA, it's exposing that population to "unacceptable levels of noise."

Scott Largent, a resident on the property, told ABC7 News there is nowhere else to go.

Largent said he and other residents have dubbed the area the "Crash Zone," because of its location.

In a statement to ABC7 News, the FAA explained in-part, "Airports that receive federal funds must ensure airport property is used for its intended purpose."

SJC officials told ABC7 News, "By allowing the encampments to remain on this property, the City is not compliant with the promises it made to the FAA when it accepted the grants that paid for this land (a.k.a "grant assurances") to keep the land free of incompatible use."

ABC7 News is told airport management is collaborating with colleagues in a number of City departments to "develop a corrective action plan that balances the needs of these unhoused individuals with the need to abate the land to meet FAA regulations."

"We're hoping to have until next year, honestly," he said. "So, a 12-month process because we know how significant and challenging this is gonna be- to try and get in there and clear it out."

Peralez added, "But we are mandated by the FAA to go in there and do that. So, we're working through a plan on that now."

RELATED: Student who was formerly homeless and in foster care graduates with doctorate degree

In the FAA's May 2021 letter, it told SJC;s Director of Aviation in-part, "Please understand, it is not FAA's intent to show disregard for the homelessness crises, only to ensure that use of Airport property does not become the solution to the crises."

Meantime, two flyers alerted residents about keeping their area clean. A third, stirred up a bit of confusion.

Largent read, "You must move all of your property from this location by 7 a.m. June 28th."

He said the fliers contradicted the action he and his neighbors should be taking.

Daniel Lazo, Interim Public Information Manager for the city's Parks, Recreation and Neighborhood Services department confirmed, "We recognize that the flier may have caused some confusion. And we're looking at the language of the flier, which was posted by the city's Beautify SJ team."

Lazo said PRNS is working with the City Attorney's office to accomplish that.

While that language up for review, Lazo and Peralez said those experiencing homelessness haven't been forced to leave the location just yet.

However, when the time comes, Largent anticipates it'll be turbulent.