Mechanical chimes will signal burst in air pollution around Oakland 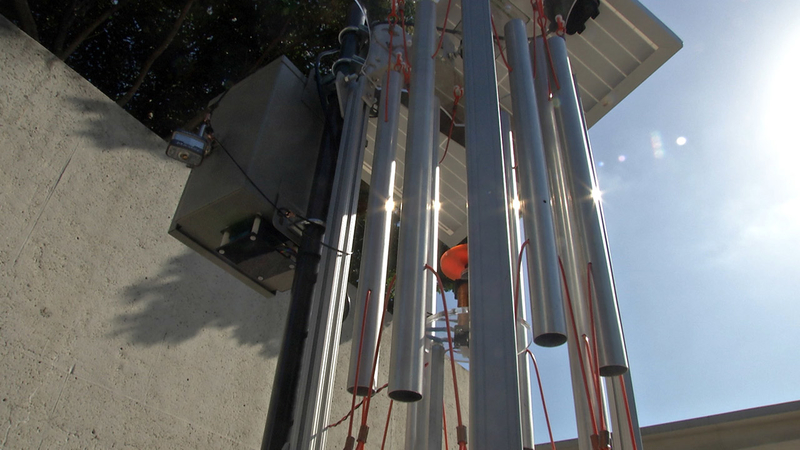 OAKLAND, Calif. (KGO) -- There is something in the air in Oakland. It's not something you can smell, or even see. But you can definitely hear it, although not always for the best of reasons.

It's a mechanical bell that will chime when there is a change in air quality. The project, Mutual Air, was created by Rosten Woo, an artist-in-residence at the Exploratorium.

Dozens of the mechanical bells will be installed outside homes and businesses in Oakland. Each will have a solar panel, a microprocessor and a particulate sensor that will chime when there is a spike in air contaminants.

"There are two registers," said Woo as he fine tuned the bell he installed outside the Oakland Museum of California. " One is tracking global carbon dioxide. It's also tracking particulate matter in the very local environment."

By local, Woo means a diesel truck rumbling by, or wood smoke from a fire. The bells are not a warning system, although they will likely be more active on Spare The Air days. Instead, he wants them to work in the background to make people stop and think about the air quality around them.

Rosten Woo adjusts a mechanical bell he installed outside the Oakland Museum of California. The bell will chime when it senses a change in air quality.

"We hope that the sounds are rather ambient. That they do not immediately attract people's attention, but they will begin to notice that there is a sound and they will want to know what is creating it," said Kirstin Bach, Program Manager for the Center for Art & Inquiry at the Exploratorium, which is sponsoring the project.

Air pollution in Oakland is nothing new for Cassandra Martin from the West Oakland Environmental Indicators Project (WOEIP). A 2008 study by the California Air Resources Board found that West Oakland has three times the diesel pollution of other Bay Area neighborhoods, most of it attributable to truck traffic.

WOEIP sends workers into the neighborhood with portable sensors to measure air quality. It also counts truck traffic in West Oakland. Their work has been instrumental in changing the Port of Oakland's truck routes to keep big rigs from rolling through some neighborhoods.

"I want one in my backyard," said Martin after learning of the mechanical chimes. "I want to know what I am breathing every day. I am right next door to a railroad station and a school. It is important that everybody is healthy and breathing cleaner air."

Check out this behind the scenes look at artist @rstnrstn Rosten Woo's project, Mutual Air: a set of networked bells that will be installed throughout Oakland. Each bell connects to global climate data and hyperlocal air-quality sensors—modern-day chimes to signal air pollution! pic.twitter.com/oj31mjHXrF

Woo will install 30 of the mechanical bells throughout Oakland over the next four months. He is looking for bell stewards who are willing to have one in their home or business.

"We are trying to connect a single sound to connect people. You might be a block or two away and you hear this tinkling, and that is a reminder that the air is changing," said Woo.