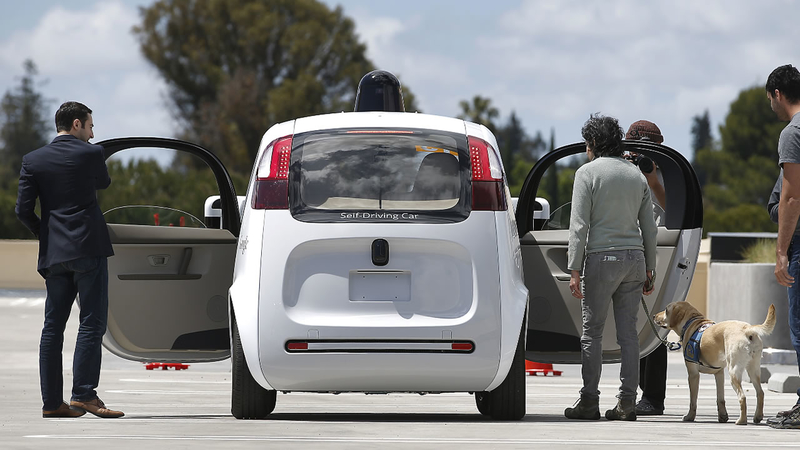 LOS ANGELES (KGO) -- There is a temporary setback for driverless cars, as the California DMV is putting the brakes on the rush to get automated cars on the road soon.

If you live in the Bay Area, you've likely shared the road with a driverless vehicle and probably didn't even know it. However, with this week's announcement, some are now concerned these types of cars could be driven out of state.

The DMV released a set of proposed guidelines that could put ordinary people behind the wheel of autonomous vehicles.

Dr. Wendy Ju, Ph.D., at the Center For Auto-Motive Research at Stanford University, says the announcement is a move in the right direction and is actually a big step towards the public deployment of these vehicles.

Among the proposed requirements, a licensed driver would still be required to sit in the driver's seat, ready to take the wheel if something happened. That driver would also be liable for any violations on the road. And manufacturers would need to subject their vehicles to a third-party safety test. They would also need to apply for three-year permits that would allow them to lease, but not sell self-driving cars to the public.

"The more effort they put into this, the more people are going to want to get into these cars. If they don't do a lot of testing, then there's going to be a lot of backlash, in case something does happen," Foster City resident Renee Tarzia said.

But others disagree, saying the rules will halt the progress that's already been made. In a statement, Google, which is currently developing a driverless car of its own, said quote, "We're gravely disappointed that California is already writing a ceiling on the potential for fully self-driving cars to help all of us who live here."

However, Ju points out that the DMV proposal could lead to better research, specifically around human behavior and interaction around self-driving vehicles.

"We'll really be able to understand, in everyday driving, under all these different conditions, like what it is that people are going to do, and that's really important to understanding how to design self-driving cars that are safe for everybody," Ju said.

The DMV will accept public feedback at meetings in January and February in Sacramento and Los Angeles.

California is the largest auto market in the U.S., and its rules will be a landmark in the development of self-driving technology.

Before granting that initial permit, both the manufacturer and an independent certifier would need to sign off that the car has passed safety testing. Any person who wants to lease or use one of the cars would need special training provided by the manufacturer, and then receive a special certification on their driver's license.

The cars use a suite of sensors - including radar, lasers and cameras - and onboard computers to drive. Many also rely on maps that detail everything from curb heights to the exact placement of lane stripes.

Eleven companies have permission to test on California's public roads, with Ford the latest addition. There have been scattered collisions, nearly all involving Google cars. Those collisions have been minor and the tech giants says each has been caused by other drivers, not its technology.