'We are the caretakers of this earth': Indigenous police sergeant brings culture to career, family 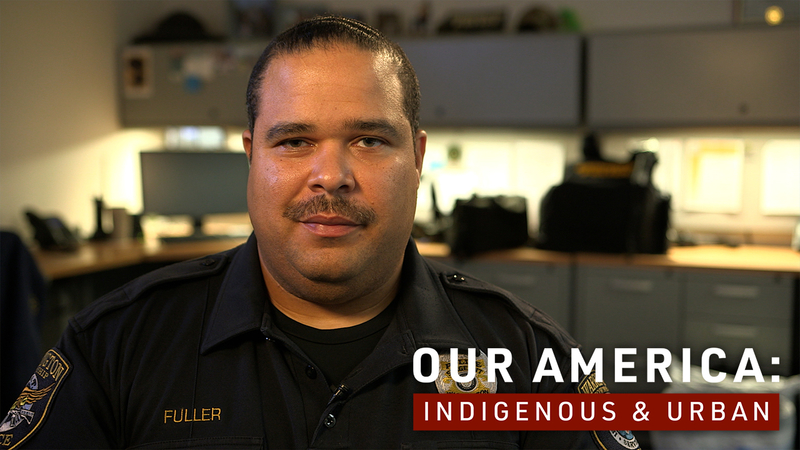 WARRINGTON TWP., Penn. -- As Sgt. Quentin Little Bear Fuller III trains alongside his fellow officers in his Pennsylvania police department, he reflects on the career that, to him, was a calling.

"It's part of my culture that we help those in need," said Fuller, who is part of the Seminole Tribe, often known as the "Unconquered People."

"We're called the 'Unconquered People' because we forced the U.S. government into treaties, not the other way around," Fuller said.

His beliefs are part of what drives him when he's on duty with the police department of Warrington Township, a Bucks County suburb of Philadelphia.

"We are the caretakers of this earth," he said.

But he said his Native spirituality can also be what makes being a police officer difficult at times.

"It's difficult to be Native and be a police officer," he said. "It's like, if I don't immediately say something is wrong on face value, then I condone it, just because I wear the uniform. That's not the case."

At the same time, Fuller's measured approach to his job is part of what has made him so valuable to the Warrington Township Police Department

"He's relied on very heavily," said Warrington Police Chief Daniel J. Friel. "As a sergeant, you have to be a leader, and people have to want to follow you. He's a perfect example of that."

Fuller is used to balancing two very different worlds. He's done so with his own heritage since he was a child.

"My dad is Seminole, and my mother is German," he said. "She's Catholic. I grew up and went to a Catholic grade school and made my sacraments. At the same time, I was going through the ceremonies of my Native side, and at some particular point, I was allowed to choose where my heart was."

It's the same type of confidence Fuller's daughters feel.

"A couple of my friends have asked me," said 10-year-old Olivia Honec Evangeline Fuller. "I just say that I'm Seminole."

The police sergeant hopes to dispel the myth that Indigenous people share the same physical traits.

"The high cheekbones, the olive skin, the long thick, dark black hair -- in actuality, that's a few tribes. But even people from those tribes don't all look like that," Fuller said. "Indigenous is just that. It's Indigenous people of this land. It doesn't have a border. Because someone looks Mexican doesn't necessarily make them Mexican. They could be Aztec."

It's a conversation Fuller has had to have before.

"Being told I'm not Native enough has been part of my life since I was young," said Fuller, whose curly hair and green eyes have sometimes prompted people to question his heritage.

"I always felt like I had to prove how Native I was, which is ridiculous," he said. "But even other Natives do it to each other, and that's a problem."

As he grew older, he grew more confident in his heritage, thanks in part to the powwows his family attended.

"We would travel in the summertime to powwows. I actually had friends that I would only see in the summer, and we could share our experiences of how it was growing up in two worlds. It was something I could share with them that made it OK. It put it in perspective."

That perspective is something he now shares with his daughters.

"There's no doubt in my mind that they're going to learn about their heritage," Fuller said. "I couldn't sit by and allow them not to have the opportunity to know who they are. That's cruel."

Fuller and his wife Linda, who has Irish and Italian heritage, have always encouraged their daughters to be proud of their Native American heritage.

"I can't imagine our family without having the Native culture in it," said Linda, who is not Native American but often organizes the family's participation in powwows. That includes elaborate costuming for Lucia and Olivia, who participate in dancing competitions at those powwows.

Fuller has also been known to dress in his colorful regalia and perform during powwows. Just like their father, the girls learn all aspects of their heritage from both parents' sides.

"Just like my parents, my wife is Catholic," Fuller said. "They're raised in two worlds ... and they will find their own truth."

The one thing Fuller asks of his daughters is that they keep their Seminole traditions alive.

"It's difficult to keep your culture going when you're alone," Fuller said, reflecting on his childhood.

"When you actually think about it, we're the only people that are a minority in our own country," he continued. "If you're Irish and you lose your Irish heritage, you can go to Ireland and find someone to reinvigorate it. We lose our heritage, there's nowhere to go. There's no one to talk to. When it's gone, it's gone"