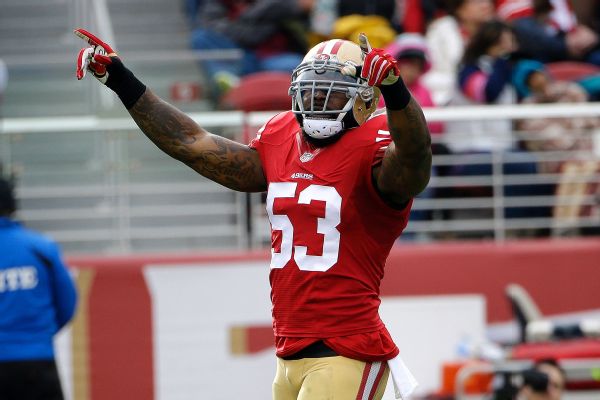 Before Sunday's game against the Indianapolis Colts, Shanahan informed Bowman that, at some point, he would be getting a little more rest than usual.

Shanahan and the Niners followed through with that plan in the Niners' 26-23 overtime loss, with Bowman exiting the game for a stretch right before halftime and for bits and pieces elsewhere.

"I don't know, man," Bowman said. "We had a conversation, and I don't know. They're doing what they want to do. I don't know. I don't like it. No one likes coming out of the game, but I'm a team player."

Some of those missed snaps were because Bowman was suffering from a stinger in his neck, but not all of them were.

"We also had plans to take him out a couple series throughout the game just to make sure to keep him fresh," Shanahan said.

Bowman played 58 of 76 defensive snaps. and finished with a team-high 10 tackles. Brock Coyle replaced Bowman when he came out and posted two tackles and a half-sack.

Although Bowman said he was aware of the plan, he said that it was not an easy pill to swallow in a tightly contested game.

"They told me, but it's just hard to do that in the midst of a tough game, and no player likes getting taken out," Bowman said. "So I don't know."

Bowman went on to repeat the phrase "I don't know" a couple more times when asked if he at least understood Shanahan's rationale. Bowman admitted to struggling to play on short rest against the Los Angeles Rams a couple of weeks ago but has not expressed such concerns when given a full week to recover.

Meanwhile, starting running back Carlos Hyde also found himself on the sideline for a large portion of the second half, as rookie Matt Breida stepped in for him. Hyde, who has been dealing with an oblique injury but was not on the team's final injury report Friday, said he was not out because of that issue.

"That wasn't injury-related," Hyde said. "That was just the coach's call. ... I mean, I don't like it, but my boy Matt, he's a good back, so he did a good job of going in there and making plays and stuff. It's good that he got a taste of some action, so hopefully he can build on it and move forward from there."

Shanahan said the decision to go with Breida more in the second half was simply a matter of leaning on the player who is producing.